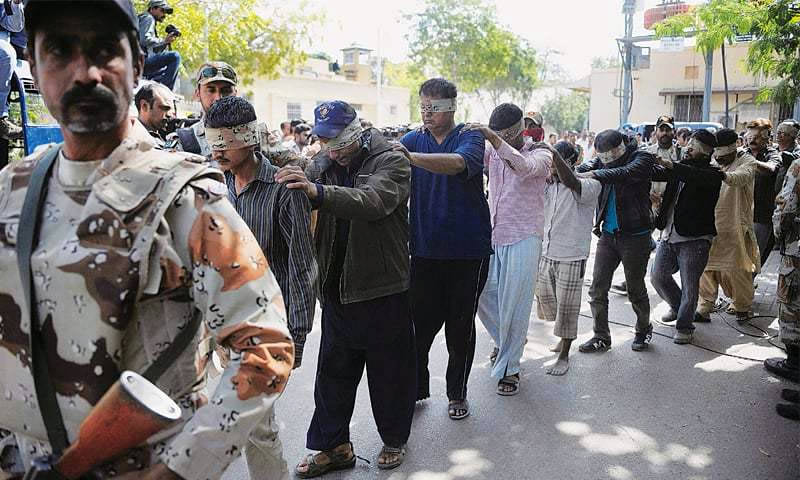 The Pakistan Rangers informed an anti-terrorism court (ATC) on Thursday that 28 suspects, including Muttahida Qaumi Movement leader Amir Khan, picked up from the MQM headquarters during Wednesday’s raid were under 90 days of preventive detention for questioning. The Rangers personnel and their prosecutor brought the blindfolded suspects to the anti-terrorism court amid tight security. Amir Khan was in handcuffs. They produced the suspects before ATC-II and submitted that in exercise of power conferred by the provincial government on Nov 9, 2013, they detained the suspects upon receiving credible information about their involvement in offences relating to target killing and terrorist activities punishable under the Anti-terrorism Act, 1997. Therefore, they said that detainees were placed under preventive detention for three months under Section 11EEEE (1) and in compliance of Section 11EEEE (3) of ATA they were produced along with copies of notification, detention orders and jail warrants for the court’s information. Some members of MQM’s legal wing were present in the court and they asked the judge to call a report from the Rangers asking them what kind of credible information they had and why had they detained MQM coordination committee member Amir Khan despite the fact that the paramilitary force’s spokesman had told the media that he was not arres­ted, but brought for inquiry.

But the judge observed that under the law she was not empowered to seek any such report. After establishing the identity of the suspects, the court asked the Rangers to keep them in their custody. According to Section 11EEEE (1), “the government or, where the provisions of section 4 have been invoked, the armed forces or civil armed forces, as the case may be, subject to the specific or general order of the government in this regard, for period not exceeding three months and after recording reasons thereof, issue order for the preventive detention of any person who has been concerned in any offence under this act relating to the security or defence of Pakistan or any part thereof, or public order relating to target killing, kidnapping for ransom, and extortion / bhatta, or the maintenance of supplies or services, or against whom a reasonable complaint has been made or credible information has been received, or a reasonable suspicion exists of his having been so concerned, for purpose of inquiry”.