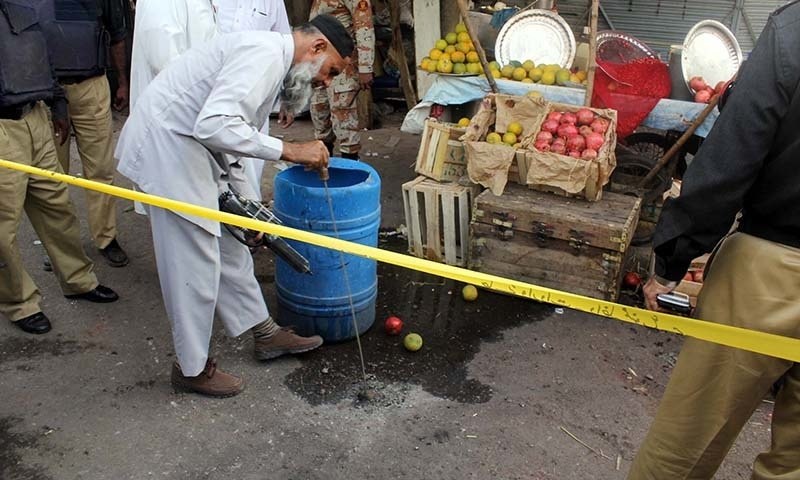 At least two persons were killed and 13 others wounded in an explosion near Murghi Khana bus stop in Karachi’s Quaidabad area on Friday morning. Most of the victims were policemen.

The explosives, which were planted on a motorcycle, detonated as a bus of the Sindh Police’s Special Security Unit passed by, according to Station House Officer of Quaidabad police station. Around 50 police personnel were travelling in the vehicle at the time of the blast. Rescue and emergency teams were dispatched to the blast site, while the victims were shifted to Jinnah Postgraduate Medical Centre for treatment. Two policemen later succumbed to their wounds while receiving treatment. In-charge of the JPMC Accidents and Emergency Department, Dr Seemi Jamali, confirmed that 12 wounded persons had been brought in to the hospital for treatment. She added that the condition of one wounded was reported as critical. Dr Jamali further said that most of the victims had suffered ball-bearing and shrapnel injuries. Security personnel also reached the spot and cordoned off the area as a probe into the incident went underway. The bomb disposal squad have also been called in to collect evidence. Fear and panic gripped the area following the blast which was heard far and wide. The blast also caused damage to other vehicles in its vicinity.

This is not the first attack on Police and Rangers personnel and officers in the Sindh capital as many have lost lives in fight against militancy, targeted killing and sectarian violence in the past as well. Grenades have been lobbed at police stations and vehicles. Karachi has been a cauldron of ethnic and political tension for decades, where political parties have militant wings, gangs make money through drug-trafficking, land grabbing and other forms of crime, and sectarian violence. Targeted operations by Police and Rangers’ forces are ongoing in the city under a directive issued by the federal government against criminals already identified by federal, military and civilian agencies. Pakistan also faces Taliban insurgents and militants who have killed thousands of civilians and security personnel since they began their fight against the government in 2007.