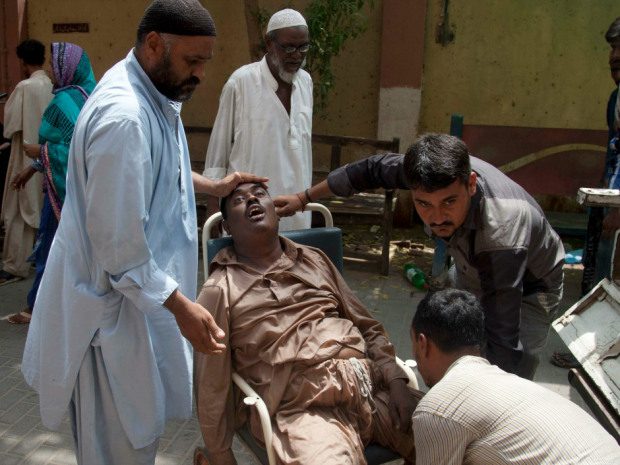 While the weeklong spell of heatwave has ended, with the Sindh government putting the figure of those affected by heatstroke at 100,000 in Karachi only, at least 26 more victims died in the city and two other districts on Monday.

Of the latest deaths, 20 were reported from Karachi and three each from Dadu and Naushahro Feroze districts, officials said.

The death toll has now increased to 1,332 — 1,234 in Karachi and 98 in other districts of Sindh — since June 20 when the punishing heatwave gripped the province. While visiting patients at the Qatar Hospital on Monday, Sindh Chief Minister Syed Qaim Ali Shah said all the health facilities had been exempted from loadshedding yet the local power utility, K-Electric, allegedly suspended the supply to the hospital. “Our government has to run generators for long hours at hospitals during the loadshedding to save the lives of thousands of heatstroke victims,” said Mr Shah.

He told the media that he himself was witness to the outage at the Qatar Hospital. He said it was in contravention of the agreement with K-Electric, as hospitals, Karachi Water and Sewerage Board and other utilities had been declared exempted from loadshedding plan. He said the situation worsened because of power outages though the government had made all necessary arrangements to cope with the heatwave, as hospitals were put on alert and extra facilities had been provided to save the lives. The chief minister’s visit to the Qatar Hospital was the first one after Pakistan Peoples Party chairman Bilawal Bhutto-Zardari had visited the patients at the Civil Hospital Karachi a day earlier.

He said the government had put into use all available resources to handle the disaster that he declared the worst since the 2010 floods in Sindh. Meanwhile, Sindh Information Minister Sharjeel Inam Memon said more than 100,000 people had been affected by the heatwave only in Karachi, the total number of heatwave victims living in other parts of Sindh was being compiled. A senior official in the health department said that hospitals in Karachi were still receiving heatstroke patients despite a change in the weather after the last week heatwave. “The hospitals still receive heatstroke patients in the afternoon when the city abundantly receives heat,” said the official.

Officials at various hospitals said the focus on heatwave victims had affected the health care delivery system for other patients. “We are trying to keep our focus on all the patients along with the heatwave victims, but most of our doctors and paramedics have been diverted to the dedicated facilities for heatstroke victims, with the result that other patients are suffering,” said a senior official in the Karachi Metropolitan Corporation (KMC), which runs scores of health facilities including the Abbasi Shaheed Hospital.

Maleeha Lodhi in Islamabad for Consultations