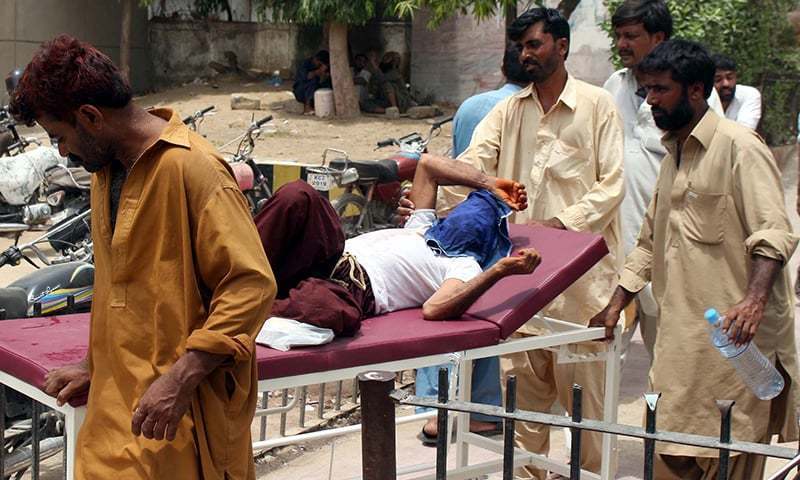 At least 25 more people died of heatstroke in the province on Tuesday with environmentalists saying that the punishing heatwave has not yet fully gone and sea breeze has not yet returned to the metropolis despite decreasing temperatures and improved weather patterns.

Officials said that with 22 more deaths in the city its tally was now 1,256 while the three more deaths in Badin and Thar districts brought the heat-related deaths to 101 in other districts of the province, taking the overall toll to 1,357.

The provincial government earlier said heatwave had affected more than 100,000 people in Karachi alone while hundreds others were estimated to be hit by it. Despite repeated trips to various hospitals of the city by the chief minister and his cabinet ministers till Monday following Pakistan Peoples Party chief Bilawal Bhutto-Zardari’s visit to the Civil Hospital Karachi (CHK) on Sunday, the provincial cabinet at its meeting on Tuesday said not a single word of policy, inviting further criticism from the opposition parties. “It shows how serious the provincial government is about the welfare of the people of the province, Karachi in particular,” said Syed Hafeezuddin, a provincial lawmaker of the Pakistan Tehreek-i-Insaf.

The provincial cabinet’s sole focus during the meeting was on the National Action Plan. Environmentalists, however, warn that the authorities would have to do a lot of work to save further loss of life during the current heatwave and be prepared for the future when more such climatic disasters were in store. “Repeated warnings had been given by the Intergovernmental Panel on Climate Change in the previous years about possible heatwave disasters in Southeast Asia, but we turned a deaf ear to it and it caught us unawares,” said Dr Tahir Qureshi, eminent environmentalist belonging to the World Conservation Union, while speaking to Dawn.

He said despite decreasing temperatures, sea breeze, the city’s own cooling system, had not fully returned, confirming that the situation was still grim and deadly for the most vulnerable inhabitants, particularly the low-income elderly and socially-isolated poor. Officials at the city’s hospitals said a majority of the dead appeared to have hailed from lower economic groups, including many homeless, beggars and drug addicts.

“Though temperatures are not as high as before, the low pressure in the sea still remains, which means the heatwave is still in Sindh,” said Dr Qureshi, adding that the inadequate sea breeze was not sufficiently neutralising the heatwave. Officials at various hospitals were perplexed over the heatwave phenomenon, which, they said, had seemingly faded away yet patients affected by it were arriving at the emergency departments. “Their numbers have decreased significantly, but they are still coming to us. Most of them are elderly and belong to the poor groups,” said Dr Saeed Qureshi, who heads the CHK.