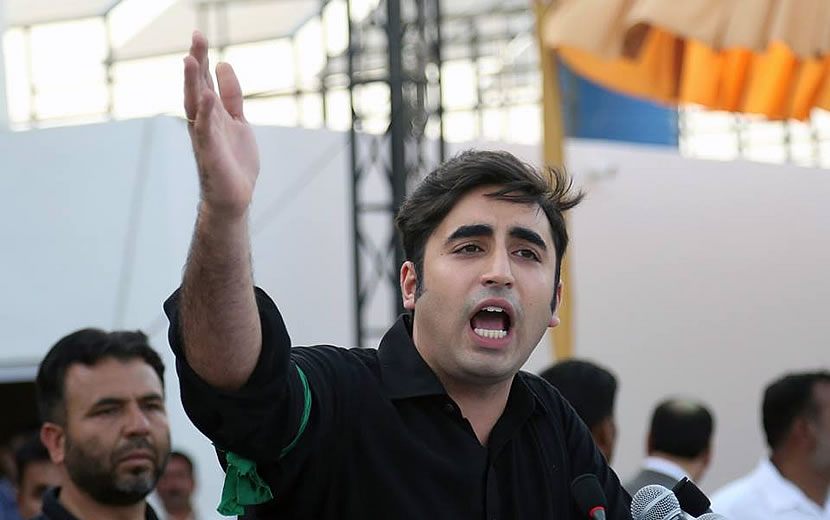 KARACHI: Pakistan Peoples Party chairman Bilawal Bhutto-Zardari on Sunday held a meeting with Corps Commander Lt- Gen Naveed Mukhtar and the director general of the Sindh Rangers, where tough questions were asked concerning some individuals in the provincial government whose actions were seen messing up the targeted operation in Karachi.


“The meeting with the corps commander is the first of its kind since Bilawal became the party’s head,” said a PPP spokesman after the meeting, which was held at Chief Minister House in the presence of CM Syed Qaim Ali Shah before the meeting of the Sindh apex committee.

Though, the party leaders insisted that it was not a scheduled meeting, some well-placed sources said it was a duly arranged gathering. Mr Bhutto-Zardari was the first to arrive at CM House minutes before the corps commander.

The sources said in the first phase it was a troika meeting in which CM Shah also participated and kept elaborating his party and government’s stance as Mr Bhutto-Zardari spoke on certain issues.
‘We salute our soldiers who are fighting against terrorists and we pay homage to the martyrs’

The PPP spokesman said Mr Bhutto-Zardari praised the achievement and success of the Operation Zarb-i-Azb and said that the PPP had historically stuck to its principled stance against militancy in the country and overwhelmingly supported all the efforts of the military aimed at curbing it.

“We salute our soldiers who are fighting against terrorists and we pay homage to the martyrs,” Mr Bhutto-Zardari was quoted as saying in the meeting.

The party leaders said he also discussed the ‘successful operations’ by the law enforcement agencies in Karachi, which were bringing peace to the metropolis as was evident from the tangible fall in targeted killings.

The sources, however, said that during the meeting, which was later joined by Rangers DG Major General Bilal Akbar, Mr Bhutto-Zardari discussed the raids conducted by the paramilitary force against the Fishermen Cooperative Society and various other provincial government departments.

The sources said that the Rangers chief said that in future no raids would be conducted without informing the Sindh government, while the PPP chairman also assured the corps commander that CM Shah would take action against the corrupt individuals and those, if any, harbouring ‘terrorists’. Mr Bhutto-Zardari assured the corps commander that his party was ready to fight against militancy, corruption and mafias. “We have longstanding stance against terrorism for which our party has sacrificed the lives of its leaders and cadres.”

The sources said Mr Bhutto-Zardari asked the chief minister to ensure that all the issues, which were confronting someway to the ultimate success of the targeted operations in the city be addressed in full on the provincial government’s side.