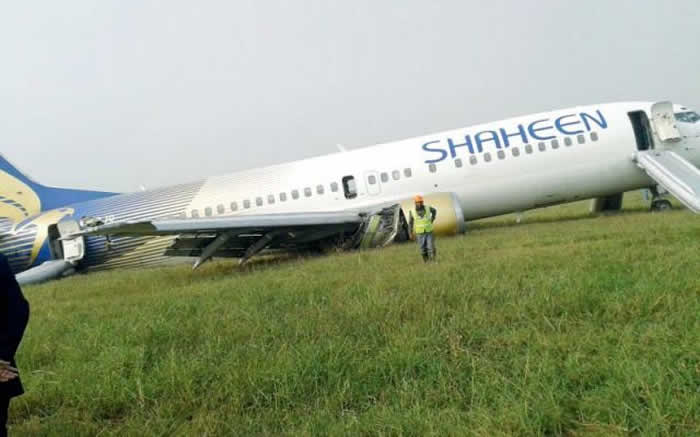 A police team from Punjab has arrested Capt Asmat Mehmood, the pilot who crash-landed a Shaheen Air flight in Lahore on Nov 3. The team raided the pilot’s home in the Defence Housing Authority early on Sunday morning and took him away, according to his family and friends.

The Civil Aviation Authority has accused the pilot of having flown the plane while he was fatigued and ‘drunk’.

The pilot’s home is located in the jurisdiction of the Darakhshan police station, which expressed ignorance about the raid and the arrest. When contacted, the Karachi-South Zone DIG, Dr Jamil Ahmed, told Dawn that he could not comment because he was on leave. But another senior police officer, who wished not to be named, said that local police personnel had accompanied the Punjab police team during the raid and an entry was made in the diary of the police station. Family members and friends told newsmen that 12 to 15 men, some in police uniform, had entered the pilot’s residence after scaling its walls. They accused the police personnel of manhandling Capt Mehmood before taking him away. They also took away his laptop. Capt Mumtaz Hussain, a member of the inquiry team formed by the CAA, told Dawn that charges against the pilot were ‘baseless’.

According to him, the pilot saved lives of 120 passengers and the crash-landing was caused by ‘overweight’. He claimed that the plane had met with four such incidents over the past three years in Karachi, Quetta and Sialkot. Quoting the pilot’s daughter, Capt Mumtaz said the police subjected Mr Mehmood to ‘undesirable attitude’.  They broke the door, beat up the domestic servant and barged into the pilot’s room. When his (pilot) daughter asked the ‘intruders’ about their identity they said they were ‘robbers’. When the pilot told them to let him dress properly, they grabbed him by the neck and took him away. “This is an attitude meted out to an experienced pilot who has the flying experience of 20,000 hours,” said Capt Mumtaz. Deputy Inspector General (Operations), Lahore, Dr Haider Ashraf confirmed on Sunday evening that the Punjab police had arrested the pilot from Karachi. He told Dawn that a case had been registered against Captain Asmat Mehmood under Section 7 of the Anti-Terrorism Act at Sarwar Road police station on CAA’s complaint.

At least 10 passengers were injured when the plane crash-landed. Carrying 121 passengers and crew, the plane reportedly touched down heavily causing its tyres to burst and skid off the runway. Passengers suffered minor injuries when hand-carry luggage in overhead cabinets fell on them. CAA spokesman Pervez George told Dawn that the action against the pilot had been taken after the inquiry team found him drunk while flying the aircraft. As per the Pakistan Civil Aviation Rules approved by the Government of Islamic Republic of Pakistan, no alcohol level is acceptable in the blood of any pilot, cockpit crew, cabin crew and passengers,” he said. Mr George said that medical investigation reports of cockpit crew of the Shaheen Air flight NL-142 just after the incident revealed that the pilot in command had unacceptable level of blood alcohol and lactate.