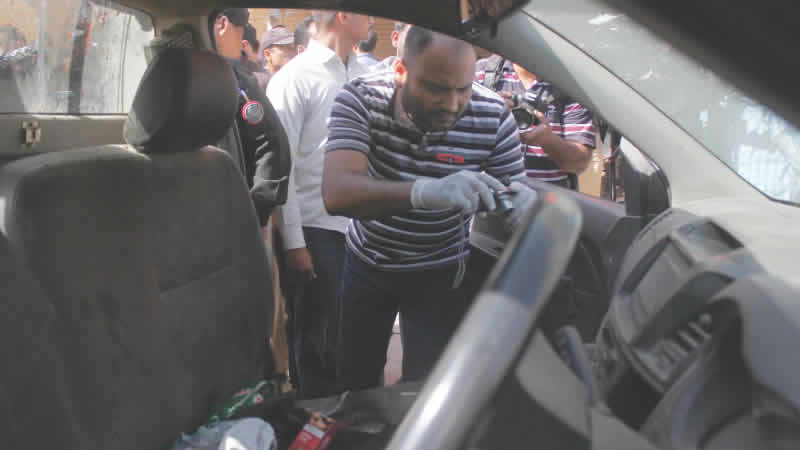 In one of the deadliest assaults on police in recent years, seven commandos of the law enforcement agency guarding polio workers in Orangi Town were gunned down in twin attacks carried out by armed motorcyclists on Wednesday.

The renewed wave of attacks on police and the Rangers, whose four checkpoints were targeted only last month, once again stoked fears among Karachiites who had witnessed peace for more than a year amid the Rangers-led operation against militants in the city. Although Jamaat-ul-Ahrar, a breakaway faction of the Tehreek-i-Taliban Pakistan, claimed responsibility for deadly attacks on the police, the information needed to be confirmed, according to an officer of the counterterrorism department of Sindh police. “It was around 2pm when eight suspects riding four motorbikes attacked a stationary police mobile van, killing three officials sitting in it before shooting down another policeman standing at a shop in Bangla Bazaar, Orangi-15,” said Karachi-West DIG Feroze Shah.

While fleeing, the attackers killed three other policemen, who were guarding polio workers in a congested locality, about 400 metres from the place of the first attack, added the officer. It seemed that the target was not polio workers but policemen, said the DIG. The victims were identified as Malik Rustam, Ghazi Khan, Yasin, Ismail, Ghulam Rasool, Wazir Ali and Daimuddin. There was a pool of blood in front of the multi-storey building housing Kanzul Iman Academy on its first floor and shops on the ground floor, where one of the policemen was attacked, a visit to the crime scene in Orangi-15 showed. Witnesses told Dawn that the police official had arrived at the shop to buy some food for lunch. An officer of the Counter Terrorism Department, Raja Umer Khattab, told Dawn that all the seven policemen were hit in the head. The shooters used four weapons in the attacks, he added.

“Eight spent bullet casings of 9mm pistol were found at the two crime scenes,” said SSP investigations Akhtar Farooq. The CTD officer, who examined the crime scene, believed both attacks were carried out by the same group. He said the Jamaat-ul-Ahrar had claimed responsibility for the deadly attacks on the police, but it needed to be confirmed. “One militant group had remained active from 2014 till February 2015 and now it seemed that the same group had reactivated itself to carry out terror acts,” believed Mr Khattab. The brazen attacks might have been carried out in ‘coordination’ with Lashkar-i-Jhangvi that had some influence in the area, the CTD officer said. He added that the policemen in the mobile van were supposed to cover those guarding the polio workers. The police said that Ghulam Rasool, Wazir Ali and Daimuddin associated with the Rapid Response Force had come from the Shahdadpur police training centre to provide security to polio workers, while the four other victims belonged to Muhafiz Force of the police and were residents of Karachi.

After a post-mortem examination at the Abbasi Shaheed Hospital, all the bodies were shifted to the Edhi morgue. The teenage Faisal Mehmood, who was still dressed in his school uniform at the mortuary, told Dawn that his father, Malik Rustam, received an urgent call for duty though it was his day off. He gave him Rs100 with the promise that he would definitely come to pick him from school after his exam, mourned Mehmood. It was his last English language paper of the matriculation exam after which he could not get through to his father despite making repeated calls at his father’s cellphone. “Finally, I called my father’s friends and one of them informed me that my father had been shot dead,” the boy said. Inspector general of police A.D. Khowaja, meanwhile, visited the crime scene and told the media that such incidents would not dampen the morale of the force. He said jobs would be given to two heirs of each slain policeman besides Rs2 million compensation for each family. He also announced Rs5 million reward for the person who would provide information leading to the arrest of the attackers.

In reply to a question, the police chief said there were at least 5,000 polio teams involved in administering drops to children and it was not possible to provide two police mobile vans to each team.With the killing of seven policemen, the death toll of the policemen increased to 12 during the current year while 270 had been shot dead since the start of the Rangers-led targeted operations in Karachi. A joint team of police and Rangers officials has been formed for investigation purpose, said director general of the Rangers Maj Gen Bilal Akbar. He said it would be premature to blame any group for this act but declared that polio workers would be given complete protection and better security measures would be adopted following the incident. In a late-night development, a police forensic report confirmed that the same weapons had been used in the targeted killing of at least 27 people in different areas of Orangi Town, Ittehad Town and Korangi in 2014 and 2015. CTD officer Khattab told Dawn that the people killed by the same weapons included workers of the Awami National Party and Muttahida Qaumi Movement, including MQM lawmaker Saifuddin Khalid, members of the Shia community and police officials.