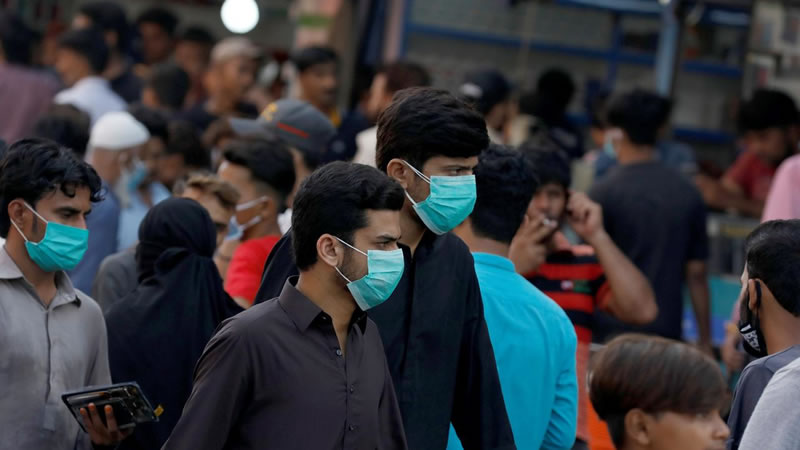 Warning that second and third waves of the coronavirus pandemic were ‘inevitable’, Sindh Health Minister Dr Azra Fazal Pechuho claimed that the pandemic could continue for a year as she cautioned lawmakers to make decisions according to the gravity of the situation.

Addressing the Sindh Assembly session on Wednesday, Pechuho dismissed the notion that she had gone into hiding. “I work around the clock. I don’t heed such propaganda,” she responded.

Adding that the Sindh government had boosted its daily testing capacity for the virus to 18,000, she maintained that the Centre and other provinces were not taking the pandemic seriously.

The minister claimed that around 178 people had contracted the disease while collecting funds from the Ehsaas Emergency Cash Programme centres, insisting that despite repeated warnings, the federal government and Pakistan Tehreek-e-Insaf (PTI) leaders had turned a blind eye to complying with the standard operating procedures.

In response to criticism from opposition MPAs, she maintained that her department had completed around 140 health projects in the outgoing year. Accusing the Centre of ‘stepmotherly’ treatment, she accused it of illegally taking over three major hospitals of the province – Jinnah Postgraduate Medical Centre, National Institute of Cardiovascular Diseases (NICVD) and National Institute of Child Health.

“We have invested huge amounts of money on these hospitals. This can be gauged from the fact that around 1 million people were treated for free at the NICVD last year,” she asserted.

Rebutting the opposition’s contention that funds had not been allocated for Karachi, she said Rs59 billion had been set aside for development and non-development expenditure in the provincial capital.

Turning to reports about shortages of rabies vaccines in Sindh, she said these were baseless, adding that there had been a shortage some time ago because of the Centre’s failure to procure these vaccines but now there were 71,000 available in various districts.

Drawing the house’s attention to the trend of suicides in the desert region and other parts of lower Sindh, he claimed that poverty and unemployment accounted for most of these.

“Every year, the Sindh government passes a budget of trillions of rupees but it has failed to address the issue of poverty in the province,” he pointed out. “We are tired of hearing about packages for the youth. After getting degrees, they run from pillar to post for jobs. Out of frustration, they end up committing suicide or take the law into their own hands.”

Criticising the province’s anti-corruption authorities, he said it only targeted the Pakistan Peoples Party’s (PPP) opponents and demanded an independent authority for this purpose.

Meanwhile, PTI’s Rabistan Khan questioned why the provincial government had not appointed a finance minister, leaving the portfolio with Sindh Chief Minister Syed Murad Ali Shah. “I think he has been given the department because of his expertise in juggling words and embezzling funds,” he remarked, adding that the budget was generated from the taxes of the people and should not be the property of the ruling elite.

Claiming that any PPP minister hoping to bring about change in Sindh was removed, he pointed to former education minister Sardar Shah as an example. “His activism did not suit the PPP leadership and they removed him from the education ministry.”

Focusing on the question of Karachi, Muttahida Qaumi Movement’s Mohammad Hussain claimed the Sindh government had collected around Rs6.74 trillion from the metropolis in the last 12 years but hadn’t even spent Rs150 billion on it.

Smart Lockdown SOPs: How to Stay Safe During Pandemic

Smart Lockdown SOPs: How to Stay Safe During Pandemic