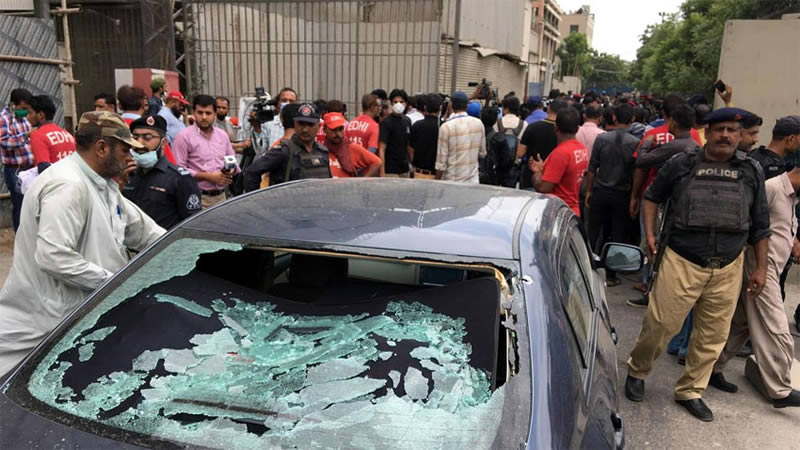 At least 10 people were killed and several others injured after four suspected terrorists stormed the Pakistan Stock Exchange on Monday.

According to police, those killed included the four attackers.

Police said that four security guards, sub-inspector and one citizen embraced martyrdom when the terrorist opened fire and tossed a grenade at the entrance to the PSX building.

Upon being informed of the attack, police and Rangers personnel reached the site in no time and cordoned off the area. The security personnel vacated and entered the building.

According to reports, the attackers came in a car and opened fire on the building’s entrance. They also tossed a grenade and entered the building. All four terrorists were killed at the main entrance gate of the PSX building.

The surrounding areas have been sealed by police and Rangers personnel while the injured have been shifted to a nearby hospital for medical treatment.

A spokesperson of Pakistan Rangers Sindh said the situation at Pakistan Stock Exchange is under control, while search and clearance operation is underway.

According to Managing Director Pakistan Stock Exchange (PSX), security forces timely action has thwarted a terrorist attack at the PSX. He said that the trading was not halted during the attack while the situation under control inside the building.

“A security guard reportedly lost his life in the attack,” he added.

The PSX is located on II Chundrigar Road, one of the busiest roads of the metropolitan city.