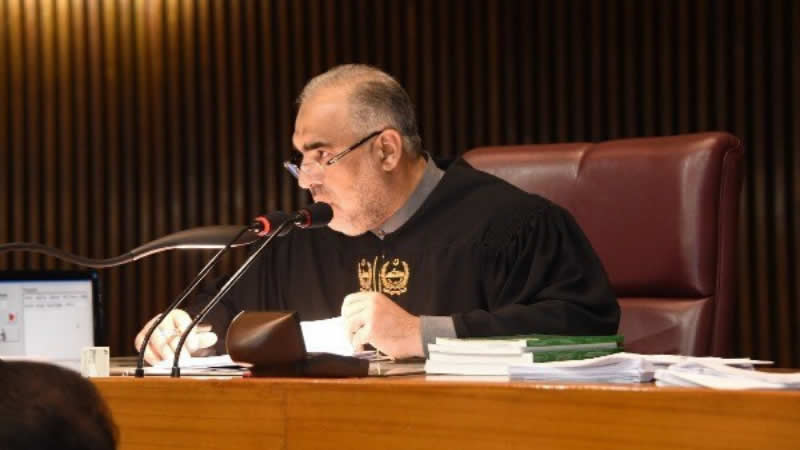 Four days after the opposition blocked the government’s move to present a resolution in the National Assembly seeking formation of a parliamentary committee on electoral reforms, Speaker Asad Qaiser on Tuesday invited the opposition parties to have the floor of the house for “unlimited days” to discuss key national issues.

The offer came from the speaker while addressing the District Bar Association (DBA), Swabi, and in a statement issued by the National Assembly Secretariat after his meeting with federal Minister for Science and Technology Fawad Chaudhry earlier in the day in Islamabad.

Addressing the DBA, the speaker said he was ready to allow the opposition to hold a debate for an unlimited time on national issues, including electoral reforms, judicial reforms, trade with India and the State Bank of Pakistan. He said resolution of socio-economic issues faced by the country required a political consensus, adding that welfare of the people depended on initiatives taken by the public representatives in the parliament. He said the National Assembly was the only forum to bring reforms and lead the country on the path of development.

Earlier, talking to Mr Chaudhry, the speaker said the consensus among all political parties was imperative, especially on the floor of the house, to enable the country to meet socio-economic challenges. He said the issues like electoral reforms, judicial reforms, trade with India and economic woes must be deliberated in the assembly and the role of the opposition in highlighting these challenges was of vital importance. He said both the opposition and treasury benches could develop consensus to introduce policy reforms in the best interest of the masses.

Mr Qaiser said the country was facing multiple challenges and it needed in-depth deliberation, especially on the floor of the assembly, and the role of opposition benches was inevitable in this regard.

On the other hand, both major opposition parties — the Pakistan Muslim League-Nawaz (PML-N) and the Pakistan Peoples Party (PPP) — rejected the speaker’s offer, alleging that Mr Qaiser had not been conducting the proceedings independently and had already undermined the parliament because of his “partial conduct”.

Though the PPP and the PML-N had parted ways on the opposition benches after developing differences on the issues of resignations of lawmakers and Senate opposition leader, the reaction of the office-bearers of the two parties was almost the same.

“Being the custodian of the house, it is the responsibility of the speaker to conduct the assembly proceedings in accordance with the rules and regulations and not to do favour to anyone,” said senior vice-president of the PML-N Shahid Khaqan Abbasi, when contacted for his comments on the offer made by the speaker.

The PML-N leader said the speaker’s offer had come after his meeting with a minister which also proved that he was not independently functioning.

When asked as to why the PML-N was rejecting the offer as it was also the opposition’s demand that a debate on national issues should be conducted in the parliament, Mr Abbasi said when issues would come before them in the parliament for discussion, they would definitely talk on them, but all this should happen according to the rules and traditions of the parliament.

The PML-N stalwart said under the parliamentary traditions, the opposition members were allowed to deliver speeches on any issue after which the minister concerned made a winding up speech.

The opposition members always criticise the speaker for giving floor to the ministers to respond to every speech delivered by them and due to this strategy adopted by the speaker, the assembly has witnessed rumpus on a number of occasions since its inception in August 2018.

Similarly, PPP information secretary and MNA Shazia Marri said her party could not take the offer seriously because it had come from a “powerless” speaker who always ran the house on the dictation of the ministers. She said they had evidences to prove that the speaker did not take decisions independently.

Moreover, the PPP leader said, there must be some pre-requisites before making such an offer, which were unfortunately not there. She alleged that the ruling Pakistan Tehreek-i-Insaf under a scheme had been damaging sanctity of the parliament.

Ms Marri alleged that the speaker had failed to stop the government from blatantly violating the rules of the house and the constitution. She said how could they hold a debate in a house whose “custodian has been hijacked by the ruling party”. She said even the lawmakers felt “unprotected” because of the “powerless speaker”.

On April 2, the opposition had blocked the government’s move to present a resolution in the National Assembly authorising the speaker to constitute a parliamentary committee on electoral reforms, saying it would not become part of it without prior consultations and at a time when opposition leader Shehbaz Sharif and others were still in jail.

The motion was read out by Minister of State for Parliamentary Affairs Ali Mohammad Khan amid the opposition’s noisy protest, but Deputy Speaker Qasim Suri did not put it to vote and directed the government to engage opposition parties and bring it again with consensus.

After last month’s Senate election, Prime Minister Imran Khan through a letter had asked the speaker to form a parliamentary committee to carry out electoral reforms in the country. After receiving the directives from the prime minister, Mr Qaiser had written letters to the parliamentary leaders, asking them to suggest the names of the members for the proposed committee, but he got no response from the opposition members.