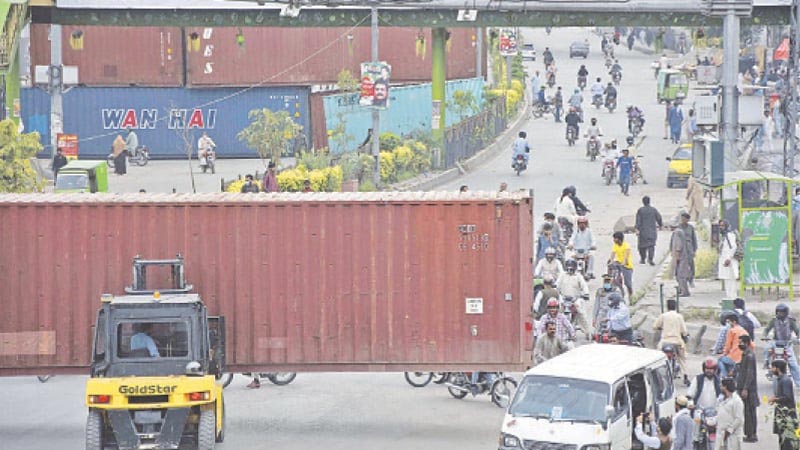 • TLP calls off protest after agreement with government
• Minister says cases registered against activists of banned outfit under Fourth Schedule to be withdrawn
• Prison department yet to receive order for release of Rizvi, others

ISLAMABAD/ LAHORE: Prime Minister Imran Khan on Tuesday made it clear that the government had no intention of lifting a ban on the Tehreek-i-Labbaik Pakistan (TLP), hours after the banned outfit called off its protests following the signing of an agreement with the government on submission of a resolution to the National Assembly about expulsion of the French ambassador.

The prime minister said the TLP would have to approach the court of law for lifting of the ban imposed by the government last week when the banned outfit staged countrywide violent demonstrations demanding eviction of the French ambassador over blasphemous caricatures.

PM Khan took the decision while presiding over a meeting of the Pakistan Tehreek-i-Insaf (PTI) parliamentary party, soon after the government claimed that it had “successful rounds of dialogue” with the TLP.

A source, who was present in the meeting, told Dawn that the prime minister was of the view that if Pakistan expelled the French ambassador, there might be a strong reaction from the European Union (EU) and Pakistan’s 27 ambassadors in western countries could be repatriated.

The prime minister said every Muslim loved Prophet Muhammad (peace be upon him) and could not bear his disrespect, but the way of condemnation by the government was quite different from that of the TLP. Mr Khan was quoted as saying: “No one can claim that he loves Prophet Muhammad more than anyone else.”

The prime minister said the western countries would not come under any pressure unless the whole Muslim ummah jointly condemned the act of blasphemy and made the West realise that it was not the issue of “freedom of speech” but harming the sentiments of billions of Muslims around the world. He said he would lead a campaign in which the heads of all Muslim states would jointly force the West to stop blasphemy of the Prophet.

Another participant said the meeting had agreed that the government would not lift ban on the TLP and the latter would have to file an appeal in a court to get the ban lifted.

“We cannot lift the ban now as it is a legal matter,” a minister, who did not want to be named, said when reminded that the ban was imposed by the interior ministry, and not by any court of law. He said the prime minister feared that if the French ambassador was sent back, the future of millions of Pakistani workers in the West would be on stake. “Similarly, our trade with the West and European states will be severed.”

A participant of the meeting said the TLP was called a banned outfit throughout the meeting. “We called them kaladam (proscribed),” she added.

Earlier, declaring the submission of the resolution to the National Assembly as historic victory for the TLP, the central shura of the banned outfit called off its protest movement and ended sit-in at its headquarters in Lahore, clearing the venue and the city after eight days of violence and blockades.

In a video statement, the shura members said that since the resolution had been presented in the National Assembly, they were winding up their protest camps. They appealed to their workers to stay peaceful and ignore [social media] rumours.

“The TLP leadership is in negotiations with the government and progress is being made on all the issues,” the statement said, adding that it was time for peace and workers should stay peaceful.

After the announcement, the TLP workers started returning home, clearing Multan Road — one of the main arteries of the city — after eight days of blockade.

In the morning, Interior Minister Sheikh Rashid Ahmed announced that the proscribed TLP had agreed to call off protests across the country. “Talks with the TLP [on other than already agreed] are going on,” he said in a video statement after the agreement.

As per the agreement, he said, the government would present a resolution on expulsion of the French ambassador in the National Assembly and the assembly session had been convened. The cases registered against TLP workers under the Fourth Schedule would also be withdrawn, he said, adding that he would hold a press conference on the matter.

No written agreement, however, was shared with the media nor made public by the either side. By the evening, execution of the agreement [withdrawal of cases under Fourth Schedule] generated some doubts when neither TLP chief Saad Hussain Rizvi nor any of his colleagues were released. The prison department official said in the afternoon they were told to make necessary arrangements for the release of Saad Rizvi, but no “written word” followed.

A high-up of the home department told Dawn that they had “neither received any instructions on his [Saad Rizvi] release nor on over 3,000 TLP workers held in different districts of the province”.

About the potential release of TLP leaders and workers, he said: “Some of them are held under the Maintenance of Public Order (MPO) section that jails the culprit for 30 days. Others were charged with and held on terrorism charges and FIRs were lodged against them. Releasing them would require a lengthy legal process that may take days, if not weeks, and when the process starts. There are, however, no official instructions so far to even start the process.”

Late in evening, Minister for Information Fawad Chaudhry said the government could release the people held under the MPO because it was entitled to do so. “But how can those booked under murder charges and terrorism be released by the government? They need legal proceedings and only court can do so.”

The minister insisted that the current status of the TLP was of a banned organisation and it had to face all those conditions that a proscribed party faced.

Govt may ban travellers from more countries after India