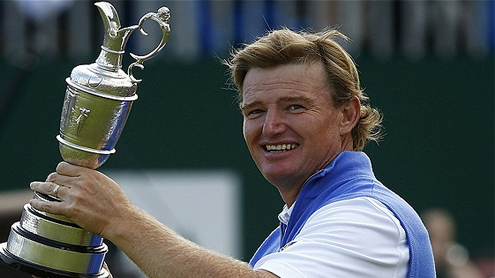 As natural as it was to feel deep joy for Els, the veteran who many had give up on after 10 barren years, it was easier to feel intense sympathy for Scott. With four holes to go he was four ahead and 1-50 with the bookies. The inscriber was in full scrape. Four bogeys later, Scott was in total and merciless ignominy. The pain was apparent when he walked off the green, but he quickly composed himself and displayed an upper-lip so tight he would have made an old officer proud. No tears, just cheers for Els. But this will hurt when it sinks in. It simply has to.  As a teenager he had sat in his Queensland home in floods of tears as he watched Norman, his inspiration, concede a six-shot lead to Nick Faldo at the 1996 Masters.

On Sunday Norman was due to play golf in Scotland in preparation for this week’s Senior Open at Turnberry. He cancelled his plans. “I’m going to watch every shot Adam hits,” Norman said.  The irony was obvious. Norman would have understood Scott’s torment better than anyone and it would be no surprise if he rang his young friend. But he would also have sent a message to the Big Easy. Els had finished second here in 1996 and then third in 2001. The set is complete, but knowing Els he won’t believe his career to be yet. Els has drawn level with Phil Mickelson on four majors, with only Tiger Woods the active player above him in the list.In truth, Els looked as startled as everyone else here. Scott had seemed so impervious up to a missed three-footer on the 16th. But Els had closed to within two by then and the tension was enveloping. The fact is Scott didn’t have to cope with much pressure until then as his nearest pursuers had pressed hard on the reverse pedal. Els was the only the only golfer in the overnight top 10 who broke 72.

Tiger Woods suffered his first triple bogey in a major in nine years after unwisely trying to play at the pin from a brutal position in a bunker on the sixth. All week he had employed a bafflingly conservative game plan, but when he needed to apply caution most he went for it. The ball almost hit him as it rebounded off the bunker wall and he was forced to play the next on his knees. Indeed, Lytham had brought him to his knees.  His 73 for a three-under total earned him a share for third with his playing partner Brandt Snedeker. Yet don’t expect Woods to be celebrating his best finish in a major since his sex scandal, or the rise back up to No 2 in the world. There is still something missing from his game, as evidenced by playing the weekend in three over. That was better than he managed at the US Open, but essentially he still flopped.

As did Graeme McDowell. The Northern Irishman’s own misery was already absolute by the time he watched playing partner Scott’s fall on the 18th. McDowell was disgusted with himself for a vicious low hook which he lost into the gorse on the 11th. His 75 saw him fall to a share of fifth with Luke Donald.  As a gauge of how difficult the modern professionals found this old tight links, the world No 1 was able to jump nine places from a tie for 14th with a one-under 69. Imagine the scale of the task if the proper winds had turned up. It was nothing more than a capricious breeze.  Best not tell that to Scott, however. With Steve Williams, the caddie who “won” 13 majors with Woods, on his bag his nerve seemed rock solid.

But when the panic set in, it was excruciating. He flew the 17th green from the centre of the fairway into thick rough. His third bogey in succession and suddenly the scores were level. A four-hole play-off loomed. No need for one. On the 18th, Scott drove into a fairway bunker with a three-wood. The 32 year-old was forced to chip out sideways, but from the fairway he courageously hit his approach to 10 feet. His putt was always wide and instantly the anguish was written all over his face.  For the last 20 minutes, Els had been on the practice putting green, texting family and friends who were congratulating him on his back nine and updating him on Scott’s progress. After nine holes, Els was six behind Scott, but on the 10th he started to reel him in.

Birdies came on the 12th, 14th and then the last. He took off his hat, waved to the galleries and threw his ball into the grandstand. Four-under on Lytham’s brutal back nine is always worth celebrating. Little did Els realise that had been a victory salute.  So 10 years after he won his Claret Jug at Muirfield, he gave it a companion. That is as remarkable a statistic as the one which tells us that the last 16 majors have been won by different players.  Els, for so many years, cut an angry figure which is completely at odds with his engaging personality. He has struggled with injuries, with his putting, with his swing and with his self-belief. No longer.

For two years in a row, The Open has been won by 42 year-olds whose careers were supposedly in the ceremonial stages. Who says this is a young man’s game? The finale had everything. Agony, ecstasy, but most of all, dignity. From the loser and the winner. “First of all, I feel for my buddy Adam,” said Els when he picking up the trophy on the 18th green, with Scott at his side. “You’re a great friend of mind and you’re going to win many of these. You have too much talent.” We can only hope he’s right.-Telegraph