Olympics 2012: Prince Harry heads for the beach as royal cheerleader 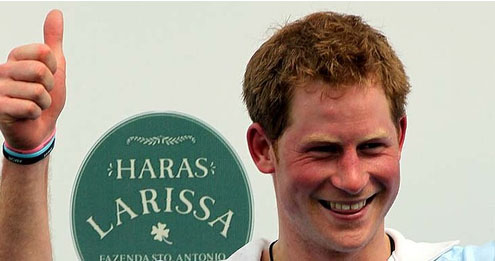 The Duke and Duchess of Cambridge and Prince Harry will attend almost 30 events between them during the London 2012 Olympics, and there are no prizes for guessing who bagged a ticket to the beach volleyball.

Prince Harry, who hooked up with members of Brazil’s beach volleyball team in Rio de Janeiro earlier this year, will watch the final of the women’s event at Horse Guards Parade on Aug 8.And with Brazil one of the fancied teams for the gold medal, the Prince may get a chance to be reunited with someof the friends he made on Flamengo beach. The Prince, the Duke and the Duchess are all ambassadors for Team GB, and will between them act as cheerleaders on all but two of the 16 days of competition.A St James’s Palace spokesman said the trio had picked out events in which they had a personal interest and also “to support Team GB as much as possible”.

Their duties will start on Friday, when all three of them will be at the opening ceremony after attending a reception at Buckingham Palace, hosted by the Queen, for heads of state and government and other dignitaries, including Michelle Obama, who arrives in London on Thursday.  Prince Harry will see his friend, Usain Bolt — who he “beat” by cheating in a race with him in Jamaica — run in the 100m final on Aug 5 and will cheer on Tom Daley and his partner, Pete Waterfield, in the 10m platform synchronised diving final.The Duke and Duchess will visit Wimbledon together for the Olympic tennis, and between them they will also take in football, gymnastics, cycling and synchronised swimming.

The Duchess will support swimmer Rebecca Adlington when she goes for gold in the 800m freestyle, as well as watching the GB women’s hockey and the sailing in Weymouth.There is no doubt where the threesome’s loyalties lie, as they will make a total of four visits to the equestrian centre in Greenwich to support Zara Phillips and her GB team-mates. The Prince of Wales and the Duchess of Cornwall will join them there on Monday and Tuesday.All three younger members of the Royal family will also pay joint visits to the Athletes’ Village, while Prince Harry and the Duchess will be at the closing ceremony on Aug 12.

The Duke’s RAF Search and Rescue duties mean he will miss the second week of the Games, including the closing ceremony.The Olympic torch appeared on EastEnders last night in a live episode of the BBC soap opera, when one of the characters ran with it through Albert Square.  During the day the flame was carried by Doreen Lawrence, mother of murder victim Stephen Lawrence, who said she was carrying it “for mothers who have gone through what I have gone through, and for all young people who have suffered, especially through racism”.

Andy Murray and Venus Williams were also among the torchbearers as the flame went to Wimbledon, before it spent the night in Wandsworth, where Tim Henman lit the overnight cauldron. Last night, Jacques Rogge, the president of the International Olympic Committee, and more than 100 members of the IOC joined the Queen for a reception at Buckingham Palace. Together with the Princess Royal, the IOC members moved on to the Royal Opera House, where Placido Domingo, Bryn Terfel, Justina Gringtyte and Renee Fleming sang music from Tosca and joined a choir for a rendition of Beethoven’s Ode to Joy.Mr Rogge presented the Queen with her own set of gold, silver and bronze medals at the reception, where the Queen paid tribute to the “dedication, hard work and personal sacrifice” of the athletes.“We send our warm wishes to them all for a rewarding and enjoyable Games,” she said.