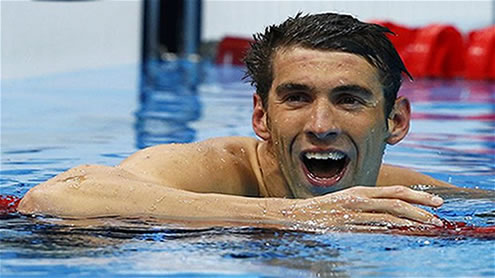 It was a coronation, but also a dethroning. Michael Phelps secured the two medals he needed to become the most decorated Olympian of all time as he took his career tally to 19 Games medals, beating the 48-year-old record of 18 held by former Soviet gymnast Larisa Latynina.

But the colour of one of those medals on Tuesday night — silver in Phelps’s signature 200 metres butterfly event — was also proof that his pre-eminence in the pool is now well and truly over as he gets ready for retirement immediately after events in London. Phelps did not do silver in Beijing four years ago. Gold was the only metal he was interested in and it was hung around his neck a record eight times, adding to the six golds he won in Athens in 2004. He added another on Tuesday when he anchored his United States team-mates to victory in the 4x200m freestyle relay in the final race of the evening programme, though his contribution was purely a lap of honour after his compatriots had already established an unassailable lead by the time he dived in.

The American victory brought the 17,000 crowd to its feet to salute Phelps’s moment of history, though the celebrations were tinged with slight disappointment that he was unable to make it a double triumph. A victory in the event he has owned for 11 years would have made him the first man in history to win three consecutive 200m butterfly titles. But, after a purposeful beginning to his record-breaking mission that took him to the 150-metre mark ahead of his rivals, Phelps’s trademark strong finish was glaringly absent as he was out-touched by the 20-year-old South African, Chad le Clos, who was so stunned at having downed the great man that he promptly burst into tears.

The margin of victory was a mere 0.05sec, with Le Clos clocking an African record of 1min 52.96sec, but a more telling statistic was that four other swimmers were quicker than Phelps over the final length. “The 200m fly didn’t really go the way I wanted,” admitted Phelps. “But I’ve had the privilege of getting to know Chad and racing him in the last year and he’s a hard worker and very talented kid.” Bob Bowman, Phelps’s long-term coach, had spoken earlier of how his swimmer had lost his appetite for the 4am training sessions after the high point of Beijing, and although he had been working intensively in the build-up to London, the base endurance was clearly lacking, just as it was when he lost his Olympic 4x100m individual medley crown on Saturday, finishing outside the medals in fourth place.

He did at least make the podium this time, though his butterfly defeat is sure to hurt more. It is the event that will forever be associated with the Baltimore swimmer, and the one that launched his Olympic career 12 years ago when he arrived in Sydney as a lanky 15-year-old with braces on his teeth. He finished fifth in the 200m butterfly at those Games but within a year he had already begun his journey to greatness when he shattered the world record. He was still three months short of his 16th birthday and he remains the youngest male swimmer ever to break a world mark. He has lowered the 200m butterfly world record seven times since.

Given Phelps’s astonishing achievements over the years, it would be wrong to dwell too much on his declining powers. Not on a night when Olympic history was being rewritten. The sight of him being presented with the 15th Olympic gold medal of his career after the United States took the relay title in 6min 59.70sec was a reminder of his exalted place in the sporting annuls. For the record, Britain finished sixth in 7min 09.33sec, though the night in the Aquatic Centre was all about one man. “I had put my mind to doing something that no-one has ever done before,” said Phelps. “Nothing was going to stand in my way.” Latynina, who won six medals in Melbourne in 1956, six in Rome in 1960 and six in Tokyo in 1964, can vouch for that after being relegated to second place on the Olympic medal list.

The pair have met before, at a photo shoot in New York, where the former gymnast presented Phelps with a medal, though not one of her treasured 18 Olympic ones, as a good-luck token. Asked about the encounter earlier this year, Phelps said: “It was an honour to meet somebody, such a legend and an icon, especially in the Olympic movement. We were sort of joking around, through a translator. It definitely was pretty cool.” It is hard to imagine Phelps, the quintessential all-American boy, messing around with a 77-year-old veteran of the old Soviet era, though the pair are united in greatness. That her record endured for nearly half a century is testimony to the enormity of her achievement, and his. -Telegraph

Officer creates database of every US bomb dropped