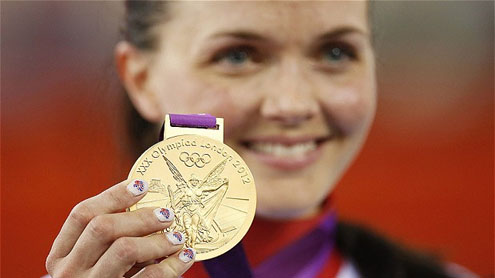 Men, women: they are all as one in this buoyant British Olympic team but the females earned special credit for leading another charge on to the podium’s highest step.

The rower Katherine Grainger took gold at the fourth attempt and Victoria Pendleton won cycling’s keirin on another night of passion in the velodrome.“I said this would be an Olympics for the girls, this was going to be ‘Here come the girls,’ ” Pendleton said.“I was so excited watching the rowers, watching Katherine Grainger a month ago. When they spoke it sent shivers through me. They were so positive and inspirational.”

All across the Olympic landscape Britain’s women broke new ground. Silvers in Sydney, Athens and Beijing turned to gold for Grainger as she and Anna Watkins captivated a 30,000 crowd at Eton Dorney by finally crossing the line in front.About the only disappointment was a second bronze in the pool for Rebecca Adlington, who was easily beaten by a 15 year-old American, Katie Ledecky, in the 800m freestyle.

Adlington, a double gold medallist in Beijing, has been swallowed up by new rivals, but Grainger, the embodiment of Olympic perseverance, has grown more formidable with age.She began her quest 15 years ago and seemed to have run out of opportunities when she wept in frustration in Beijing four summers ago. Instead she returned to the boat a year later, combining her training with a PhD study into homicide after her masters in medical law and medical ethics.

She christened her prize “the people’s medal” and must have been prominent in David Cameron’s thoughts when he praised “the amount of dedication and team spirit” in the British ranks. These are the stories that keep millions under the Olympic spell: tales of lonely dedication, of fighting off the urge to quit, of catharsis in front of an understanding audience.These tales turn minor sports into great human dramas, which the British public are devouring and drawing lessons from.“I feel so many people have been behind me and supported me and wanted this for me as much as I have,” Grainger said.

“It’s off the back of everyone I’ve ever worked with, everyone I’ve ever rowed with, everyone who’s helped me, going back to my family, who were there from the beginning, to my friends at school, university.“Every single person’s been a part of this and it makes the medal seem so much more special.”The velodrome was again a pleasuredome for 6,000 excitable ticketholders as Pendleton followed the world record-breaking men’s team pursuit quartet to gold. Ed Clancy, Geraint Thomas, Steven Burke and Peter Kennaugh were still rejoicing with family and fans and giving interviews as Pendleton tried to compose herself for her redemption ride.

The previous night, Pendleton and Jess Varnish had been disqualified in the women’s team sprint for an illegal changeover and the end of her career was looming.She had two more chances to add to her gold medal in Beijing but the keirin is not her best event. Her burst of acceleration destroyed her old Australian rival, Anna Mears, and brought Britain’s gold medal tally to eight as the hosts moved up to fourth in the table.“My legs were good from last night and I wanted to really show what I’ve got,” Pendleton said.

“I’m really looking forward to the sprint [her third and final event]. I’ve got a good chance there and I’m going to take confidence from this. I’m going to rest up tomorrow and come back with a vengeance.”Watched by Bradley Wiggins, the new icon of British sport, the cyclists reaffirmed their dominance in Beijing, where they won eight golds.There were other delights in the women’s disciplines. In front of a full house at the main Olympic Stadium, Jessica Ennis made a storming start to her two-day campaign to win the heptathlon, breaking the world record for the 100m hurdles in the event, and performed well in the high jump, clearing 1.86m. She finished ninth in the shot put in the evening, slipping to second place overall, but reclaimed the lead with a personal best of 22.83 seconds in the 200m.

The main stadium, built at vast cost, generated unprecedented fervour for an opening session. Normally, track and field starts in arenas about two thirds full. Only for the evening programmes is the fire really lit. Yesterday’s marvellous turnout stunned the athletics community. The roars for Ennis could be heard across the Olympic Park.In other cauldrons of women’s endeavour, Karina Bryant won bronze in the women’s +78kg judo and Charlotte Dujardin, the Olympic debutante, broke the British and Olympic record in the team dressage grand prix to put the team into the lead at the halfway stage at Greenwich Park.

Three British fighters will make history this weekend when women’s boxing appears on the Olympic menu for the first time. Each has medal hopes.Away from the British team — overseas stars are attracting less attention than usual, it must be admitted — Wojdan Ali Seraj Abdulrahim Shaherkani, from Mecca, became the first Saudi woman to compete at the Olympics. Only a blue belt in a world of judo masters, she was beaten swiftly by Puerto Rico’s Melissa Mojica.At Team GB’s headquarters, David Cameron watched Grainger and Watkins win gold and George Nash and William Satch win bronze on the rowing lake.

He also mentioned Gemma Gibbons, Thursday’s judo silver medallist, who he watched with Vladimir Putin, Russia’s president. “Gemma Gibbons was great,” Mr Cameron said. “I met her afterwards and she was very emotional.“I enjoyed the judo and Mr Putin was very insightful. I was getting a lesson from him as he really knows his stuff.”The Duke of Cambridge was quick to single out the achievements of the British women.

“If there’s things that come out of the end of these Olympics that really last for the legacy of the future, things like where the girls have done really well, where they have branched out, hopefully the young will follow and we can have more successes,” he said.As one Victoria attained regal status at the velodrome, another was heading home in disgrace. Victoria Baranova from Putin’s country failed a drug test in the track cycling and was expelled.There is a dark side to Olympic sport but the British can see only the glint of victories. – Telegraph