London 2012: Bolt and Blake progress through to Olympic 200m final 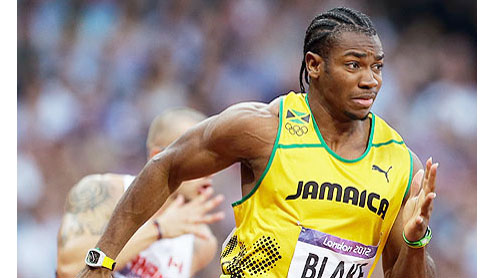 This is the one Usain Bolt always took seriously. The 200m, the event he always believed was his. It’s the one for which, in Beijing, he bothered to tie up the laces of both his shoes, keeping his foot on the throttle all the way to the finish line.

It is also the one in which his start does not seem significantly slower than those of his rivals. In the second of Wednesday night’s three semi-finals he appeared to be level with Ademir Da Silva of Brazil, running in the lane outside him, within half a dozen strides, and by the time he came off the bend there was a big stretch of clear track between the defending champion and the rest of the field.He was able to enjoy the latter stages of the race in comfort, easing up on his way to a time of 20.18sec while keeping an eye on his rivals’ progress on the big screen at the end of the home straight. Behind him came the 20-year-old Anaso Jobodwana of South Africa, taking the second automatic qualifying place for Thursday’s final.

“It’s all about going through as easy as possible,” Bolt said. “This is my favourite event. I’m focused and I’m ready. The track is fast and it’s going to be a good race. There are a lot of good competitors, a lot of people who could spoil the party.”The men’s 200m has been an incident-packed and occasionally lurid event in recent Olympics, on and off the track. After a bout of food poisoning two weeks before the Games cost an enfeebled Michael Johnson, the odds-on favourite at the age of 24, a place in the 1992 final, the great man turned up in his golden shoes in Atlanta and set a world record that would stand for 12 years, until Bolt finally lowered it.

In Sydney the gold medal was unexpectedly won by Konstantinos Kenteris of Greece, whose sudden emergence provoked widespread suspicions. They were reinforced four years later when he failed to defend the title in his home Games after an extraordinary episode the day before the opening ceremony involving a faked motorcycle accident on the way to a drug test, followed by a week-long hospital stay that turned out to be equally bogus. Later the Greek police found 30 boxes of steroids in his coach’s office. Kenteris was banned for two years.

Shawn Crawford won the 2004 gold medal, and was presented with the silver in Beijing four years later after Churandy Martina, of the Netherlands, and Wallace Spearmon of the US were disqualified from second and third places for running outside their lanes. Crawford later sent Martina his silver medal with a message saying: “I know this can’t replace the moment, but I want you to have this because I believe it’s rightfully yours.” The gold, of course, had gone to Bolt, who became the first man to win the two individual sprint titles while setting world records in each.

Jamaica’s two top sprinters seemed to have made an adequate recovery from their celebrations at the weekend after finishing first and second in the 100m final on Sunday. Yohan Blake rocketed ahead in the first semi-final but significantly slowed up to finish in 20.01, beating Spearmon by a hundredth of a second. “A walk in the park,” he called it.Christophe Lemaitre, the great hope of French sprinting, was a further hundredth back in third. Two years ago he became the only man to win the 100m, 200m and 4x100m in the European championships and Wednesday night’s 20.03 was good enough to get the 22-year-old through to the final as one of the two fastest losers in the competition, along with Alex Quiñónez of Ecuador, who finished third in Bolt’s semi-final.

The last of the semi-finals was won by Martina, who was born 28 years ago in Curaçao and has won titles at the Pan-American and South American Games as well as in the European championships. He finished in 20.17, ahead of the 22-year-old Warren Weir, a member, like Bolt and Blake, of the hugely successful Racers Track Club in Kingston. Christian Malcolm, the Welsh runner who has been around long enough to be described as ageless but is actually still only 33, finished third, but his time of 20.51 was not good enough to take him into a final in which he finished a surprised fifth in Beijing.

Up to that point it had been a mixed evening for Jamaica. Richard Phillips fell painfully in the semi-final of the 110m hurdles but the 22-year-old Hansle Parchment – a psychology student who comes from St Thomas – the mountainous parish on the south-eastern tip of Jamaica where Paul Bogle led a group of former slaves in the bloodily suppressed Morant Bay rebellion in 1865, ending on the gallows but becoming one of the island’s seven official national heroes in the process – set a new national record of 13.14sec on his way to winning the bronze medal.

Veronica Campbell-Brown, the reigning 200m champion, was unable to defend her title, finishing fourth, while her compatriot Shelly-Ann Fraser-Pryce, the winner of the gold medal in the 100m, took the silver behind Allyson Felix of the United States.It has taken a while for the London 2012 Olympic Stadium disc jockey to recognise that Jamaican music ought to play some part in the soundtrack to an evening of modern international athletics, but on Wednesday night, between the first and second semi-finals, the penny finally dropped and Desmond Dekker’s Israelites rang out, followed by the Specials version of A Message to You, Rudy. A little burst of Burning Spear or Maytals would not go amiss here in the coming days. – Guardian