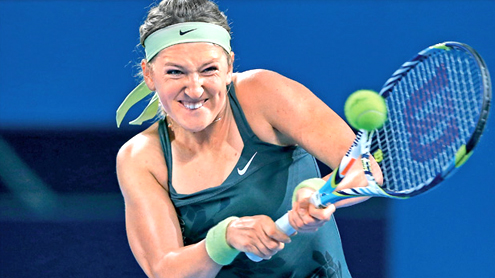 Top-ranked Victoria Azarenka opened her 2013 season with a 6-3, 6-3 win over Germany’s Sabine Lisicki on Wednesday to join No. 3 Serena Williams and fourth-seeded Angelique Kerber in the Brisbane International quarter-finals.

Azarenka, who won here in 2009 without dropping a set, got the better of 37th-ranked Lisicki in a match containing nine breaks of serve. The Belarusian won the Sydney International and then her first major at the Australian Open last year during a 26-match winning streak to start the season and spent most of 2012 atop the women’s rankings.She said her focus ahead of her first major title defense was more about attacking than defending.“I actually don’t really look at defending anything. I’m just looking to win,” Azarenka said. “I’m going to have the same mindset for as long as I’m playing.”

In earlier second-round matches, Angelique Kerber recovered from 5-2 down in the deciding tiebreaker to beat Puerto Rican qualifier Monica Puig, 3-6, 6-4, 7-6 (7) and Sloane Stephens had a 6-3, 6-4 win over Sweden’s Sofia Arvidsson to set up a quarterfinal against fellow American Williams.  Azarenka said Lisicki, who was serving at up to 194 kph (121 mph), proved a tough match and a good measure of her preparations for the Australian Open, which starts on Jan. 14.

She said Lisicki was “serving some bombs,” although the German player was only getting half of her first serves into play and had five double faults. Lisicki mixed 36 winners with 36 unforced errors, trying to push Azarenka around the court.“I had a tough challenge at the beginning,” she said. “It’s always good to see where you’re at, right at the start.”She’ll next play Kazakh qualifier Ksenia Pervak, who has ousted former No. 1 Caroline Wozniacki and Urszula Radwanska in Brisbane in matches decided by third-set tiebreakers. “I hope she’s tired,” Azarenka joked. “She’s a young girl with a lot of potential. She’s going to be really motivated. I’m looking forward to the challenge.”

Five of the top eight seeded players had already been eliminated midway through the second round. Kerber narrowly avoided that fate, coming back from 4-1 down in the third set and clawing her way back in a tiebreaker when Puig was two points from the biggest victory of her life.The 19-year-old Puig, ranked No. 124, buried a swinging volley into the bottom of the net at 5-2 in the tiebreaker and it changed the momentum of the match. “For sure it was a surprise how she played. I didn’t know her before, but, yeah, I’m sure that she’ll be coming very soon into the top 50,” Kerber said of Puig. “I have a lot of confidence right now that I won again (a) very close match.” – KhaleejNews