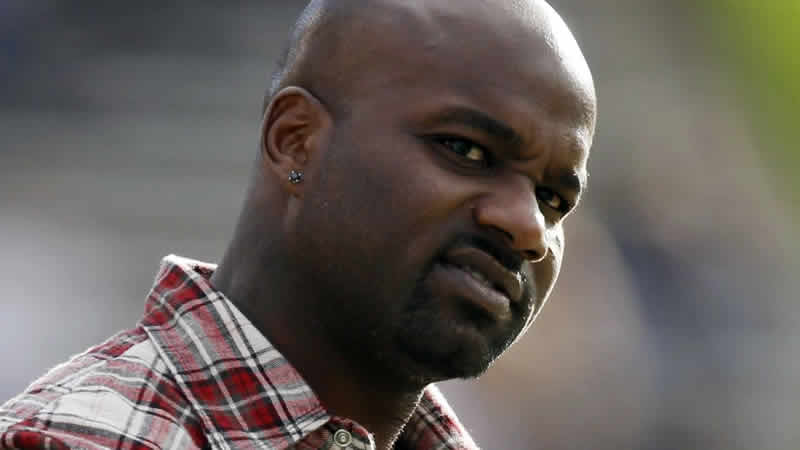 Rashaan Salaam's death reminds us, again, of how devastating football can be

You could have missed this news  those leaks about DEFLATEGATE 2.0 may have grabbed your attention but Rashaan Salaam’s brother told USA TODAY Sports that the former college and NFL running back committed suicide after experiencing memory loss and depression.

These are tell-tale signs of CTE, the degenerative brain disease linked to concussions and the sort of repetitive blows to the head that football players take.

There is no plan to study Salaam’s brain his Muslim faith prevents “desecration” of the body — but that’s probably beside the point. CTE has been found primarily in players whose families suspected it was present; it’s a self-selecting group. It was present in the brains of other players who committed suicide: Junior Seau, Andre Waters, Dave Duerson. We know this much. What we don’t know is why those players were affected, while others were not. And we don’t know if there’s a way to figure out, ahead of time, which athletes might be more susceptible. We also don’t know if there’s a drug out there  perhaps marijuana that could help prevent the spread of CTE or mitigate its symptoms. Getting to those answers has proven difficult. The NFL was slow to even acknowledge a link between CTE and football; NFL executive Jeff Miller did so in March of this year, nearly a decade and a half after Dr. Bennett Omalu examined former Steeler Mike Webster’s brain and found extensive damage unlike anything he’d seen before.

The NFL, to its credit, has spent or donated more than $100 million to research concussions and CTE. A portion of that that money has been spent on making football safer, which seems, ultimately, like an impossible task. Certainly the NFL’s various rule changes have caused players to target the head far less frequently, but big hits are still the much-celebrated norm. This disgusting hit on Darren Sproles was a penalty, but only because Deshazor Everett interfered with Sproles’ ability to catch the ball. Consider your brain: it is about three pounds of soft tissue, floating inside your skull. Think about taking the sort of hit you see literally hundreds of times on any given Sunday the ones a notch or two or three less violent than the one above. The collisions between linemen, causing subconcussive damage. A safety timing his hit perfectly and making it legally, without targeting the head, causing a wide receiver to go from running full speed in one direction to going the other way in a fraction of a second. On hits like those the brain is going to move. Making football safer would take drastic changes to the way the game is played. Equipment innovations may help, but as long as football is tackle football, brains are going to rattle.

The NFL did pledge $40 million this fall for, according to spokesman Brian McCarthy, “medical research over the next five years, primarily dedicated to neuroscience. The NFL is assembling a Scientific Advisory Board comprising leading independent experts, doctors, scientists and clinicians to develop and lead a clear process to identify and support compelling proposals for scientific research.” This is a positive step forward. But as Deadspin revealed last week, the league’s draconian stance on marijuana is already hampering research that could have been valuable in the future: A joint research project between Johns Hopkins and the University of Pennsylvania meant to monitor marijuana usage by NFL players was thwarted when the players union advised its members that their information  researchers pledged to protect the players’ anonymity  could be made public if the confidentiality of the work was for some reason challenged in court. So the players  aware that the NFL’s collective-bargaining agreement still bans all usage of marijuana, despite it being legal in some form in 29 states and the District of Columbia  backed out. Earlier this year, Tennessee Titans player Derrick Morgan told me he was advocating for the NFL and the NFLPA to study the effect of cannabis on the human brain after his own research led him to believe it could have a protective and regenerative effect on the brain.

Clinical trials appear to have showed evidence of as much, but more study is needed. And that, as much as anything, was the point of the Hopkins-Penn study: to plot the course for further clinical study. Now that work has been delayed. The NFLPA did announce last month that it would look into marijuana as a method for pain relief, but all of this progress is coming at a glacial pace and is too tied up in the politics of a league so concerned with its public image that it won’t let players wear decorated cleats but one time a year. Science is slow, as a rule, and requires careful consideration of hard evidence  not anecdotes. But on this front a league making well over $10 billion a year at this point owes it to its employees to accelerate the process more so than it already has. Rashaan Salaam is not an anomaly, he is a precursor. Go and look at all the players selected in the same draft as him. Even if only 10 percent are going through what Salaam appears to have gone through because of football, then 25 men from this one draft class are depressed, anxious, forgetful, apathetic. They’re lost. And as Salaam’s case appears to show, even former NFL players and their families may not be able or willing — to recognize these symptoms for what they are.

That must change. A Supreme Court decision issued today means the NFL will finally start paying out what could be more than 20,000 players as part of a concussion settlement it reached three years ago after about 5,000 suits were filed by ex-players. Many of them suffer silently. I can’t shake what Morgan said to me earlier this year when we were talking about player suicides: “That’s the glaring extreme end. You don’t hear as much about the guys suffering from those ailments, but not to such an extreme.” The NFL, for all its popularity, is a league full of anonymous men. Right now too many of them go on to lives that drift off the way Rashaan Salaam’s did: weighed down by sadness and confusion. They’re often too late to seek help  ignoring pain is a virtue in football  and even if they do they face a disease we still know too little about. -usatoday

Trump Tweets He Will Be Leaving Businesses Before January 20

Samiha Khan's Elimination Brings An End To Her Transformation Journey