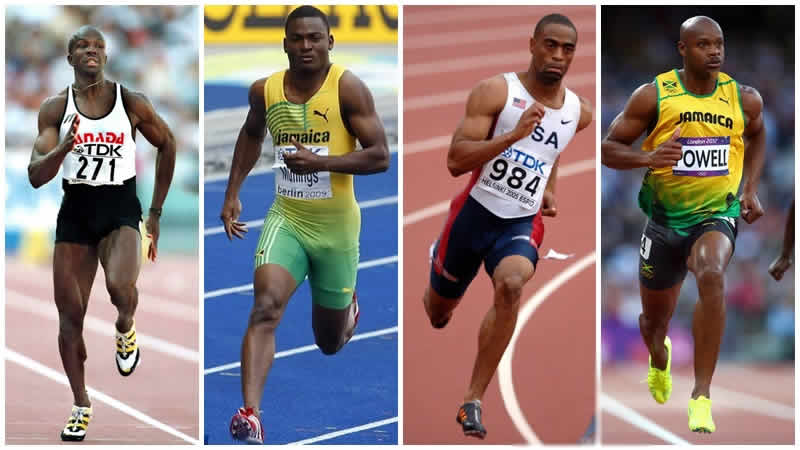 The men’s 100m dash is one of the most anticipated and popular events of every Summer Olympics and answers the question “Who is the fastest man alive?” It’s difficult to come to a consensus on who belongs on a list of the greatest sprinters of all time, due to advancements and innovations in training methods, nutrition, and gear, among other factors.

To simplify matters, this list ranks the 10 fastest sprinters ever. Here are the Top 10 sprinters with the fastest 100m times ever recorded. No surprise here! The current 100m world record holder and 3 time Olympic champion in the 100m clocked a blistering time of 9.58s at the 2009 Track and Field World Championships in Berlin. That performance was the third time Bolt broke the 100m world record in a dominant year and a half stretch from 2008-2009 that saw Bolt win 5 Olympic and World Championship gold medals. The Jamaican also holds the second fastest 100m time in history, covering the distance in 9.63s to claim gold at the 2012 Olympics in London, which was the second of his record 3 Olympic 100m gold medals. Blake, like Tyson Gay, has a personal best time of 9.69s for the 100m. However, Blake gets the second spot on this list as his 9.69s performance occurred under less favorable wind conditions than Gay’s. Blake’s impressive run came at a 2012 meet in Lausanne, Switzerland. While he may be overshadowed at times by Usain Bolt, his Jamaican countryman, Blake holds the distinction of being the youngest 100m men’s champion in World Championship history, an accomplishment Bolt will never be able to top. Gay, the American 100m record holder, ran the 100m in 9.69s in a 2009 race in Shanghai. He also ran 100m in 9.68s at the 2008 US Olympic Trials, but this time isn’t eligible for record consideration due to a strong, favorable tailwind. While Gay has won multiple World Championship gold medals, he has been unable to transfer that success to the Olympic stage. Gay’s only Olympic medal came via the 4x100m relay at the 2012 London Games, but it has since been stripped from the American team due to team members failing to pass drug tests. Lausanne, Switzerland was the site of Powell’s then world record setting run in 2008, as he raced past his competitors on route to clocking a time of 9.72s. While this record was short-lived (Usain Bolt later broke the 100m world record twice in 2008), Powell’s career has been anything but. He’s been one of the world’s best 100m sprinters for the better part of the last decade. Gatlin has run many notable 100m races during his long career, but the fastest of them all came in Ad-Dawhah, Qatar in 2015 when he was able to put up a time of 9.74s. Gatlin has had a roller coaster ride of a career, highlighted by a gold-medal winning performance for the USA in the 100m at the 2004 Olympics in Athens. On the flip side, he has faced positive drug tests and doping allegations throughout his career, culminating in a 4 year ban from international athletics. Carter finds himself solidly placed in the middle of this list, but amazingly is only the fourth fastest Jamaican sprinter of all time. Carter’s personal best time in the 100m came in 2010 at a race in Rieti, Italy. He has had both the misfortune and privilege of running in the same era as better-known Jamaican sprinters such as Asafa Powell, Yohan Blake, and of course Usain Bolt. Misfortune in that Carter has only 1 individual World Championship or Olympic medal (a bronze from the 2013 World Championships) to his name. Privilege in that he has racked up gold medals with the Jamaican 4x100m relay team. However, Carter’s name has recently been in the news for a positive drug test. The first of many Jamaicans on this list, Mullings clocked a time of 9.80s at a 2011 meet in Eugene, Oregon. He reached the top of the track and field world in 2009, winning a World Championship gold medal with the Jamaican 4x100m team. Unfortunately, Mullings’ athletics career came to a sudden end in 2011 when he was given a lifetime ban from international competition after a second positive drug test. It is fitting that Thompson, a native of Trinidad and Tobago, ran his personal best time of 9.82s in his home country at a 2014 race in Port of Spain. Thompson has competed numerous times on the international stage for Trinidad and Tobago, and has 3 Olympic medals to his name, including a gold medal in the 4x100m from the 2008 Beijing Games. Bailey, a Canadian sprinter by way of Jamaica, ran a then world record time of 9.84s in Atlanta at the 1996 Olympic 100m final, earning a gold medal along the way. He picked up a second gold medal at the Atlanta Games as a member of the Canadian 4x100m relay team. While Bailey’s 100m world record was broken a few years later, he is still the holder of the 50m world record, which he set in 1996 by covering the distance in a time of 5.56s in Reno, Nevada.