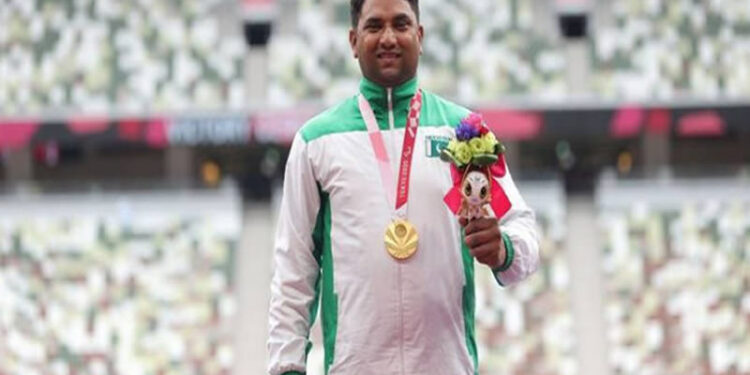 Pakistan’s Haider Ali rewrote history books Friday when he became the first Pakistani to win a gold medal in the Paralympic Games.

Haider Ali achieved the feat in the Men’s Discus Throw competition, heaving it at an impressive 55.26m distance to notch the gold medal.

His 55.26m throw is a personal best and is three meters longer than Mykola Zhabnyak’s throw, who finished in second place.

His throw of 55.26m is a personal best and almost three metres longer than second place! #Tokyo2020 #Paralympics #ParaAthletics pic.twitter.com/SD3rO1qlaF

The athlete, who suffers from cerebral palsy, also competed in the discus throw at the World Para-Athletics Championship in Dubai in 2019 and won a silver medal for Pakistan.

Cerebral palsy is a disorder because of which one part of a person’s body becomes weakened as compared to other parts. All para-athletes with cerebral palsy participate in the F37 category.

Haider Ali had competed in the long jump at the Paralympics, winning a silver medal in 2008 and a bronze medal in 2016.

He was the last hope for Pakistan to win a medal after the other Pakistani athlete, Anila Izzat Baig, had been disqualified.

‘Well done’
Meanwhile, US Embassy in Pakistan has congratulated the Pakistani player on making the history.

“Congratulations to Haider Ali for winning the first-ever Paralympic gold medal for Pakistan!” tweeted the embassy from its official account.

Federal Minister for Information Fawad Chaudhry said, “Thank you Haider Ali. We are proud of you.”