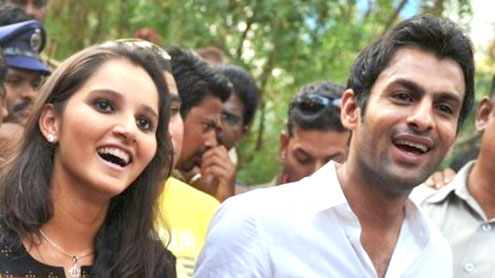 NEW DELHI: Indian tennis star Sania Mirza, who had jokingly tweeted she was at ‘war’ with husband – and former Pakistan cricket captain – Shoaib Malik, praised the defeated semifinalists on Thursday.Mirza, as well as Indo-Pak tennis partners Rohan Bopanna and Aisam-Ul-Haq Qureshi, had cheered on their teams from the United States where all had been involved in the Miami Masters tournament.”Bad luck to Pakistan..fantastic win by India but job only half done..one more to go..phheww..now I can go practice in peace..GO INDIA,” Mirza wrote her Twitter account.She later tweeted: “As for today the men in blue brought smiles to a billion ppl:) Now to support an Indian (Rohan Bopanna) and a Pakistani (Aisam Qureshi) playing together in Miami.”Mirza added: “Makes you wonder what they (Pakistan) could achieve with this talent and without all the problems and controversies surrounding them!!”Shoaib, who was left out of the 15-man World Cup squad, tweeted to his wife: “I wish I would have played today’s match. The boys in green should walk with their heads held high.”Davis Cup tennis star Mahesh Bhupathi, also playing in the United States, believes India will win Saturday’s final against Sri Lanka in Mumbai.He wrote on Twitter: “Big day.. One more to go for India. Can’t fight destiny folks. Everything going our way. Catches, home field advantage, power play and so on.” – TOI