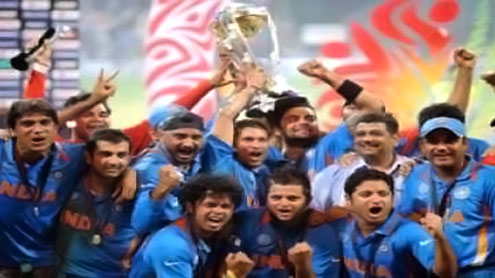 NEW DELHI: India plotted a new era of cricket domination on Sunday after their stunning World Cup success confirmed their status as the sport’s only superpower. The comfortable six-wicket win over Sri Lanka in Mumbai, India’s first world title since 1983, was also being viewed as a reflection of the country’s growing commercial and political muscle. “In the last three to four years India has done well in shooting, badminton, tennis, hockey and football,” said winning captain Mahendra Singh Dhoni. “We are growing as a sporting nation. But cricket is special because of the infrastructure. It all started with the 1983 win. Then two big players, Anil Kumble and Sachin Tendulkar, came on the scene, followed by Sourav Ganguly and Rahul Dravid. It is due to them we are getting a lot of money and respect. We are trying to pass it on to the next generation.”

Dhoni, the son of a steel factory worker, is a multi-millionaire thanks to a career which has seen him become the first man to captain a World Cup and World Twenty20 winning side. His team are also top of the world Test match rankings. Throughout the six-week tournament, he was a regular on match-day TV commercials, endorsing everything from ceiling fans to mobile phones to high-end property. But there will be little rest for his in-demand champions. India have a packed upcomimg programme, including tours of the West Indies, England and Australia before the year is out, as well as home internationals. Yet before any of that comes the latest lucrative edition of the Twenty20 Indian Premier League, starting on April 8, with Dhoni having led the Chennai Super Kings to victory in 2010.

“I don’t think we are getting enough time off. There’s no time to realise we have won the World Cup.” Significantly, even before the last celebratory firework exploded in the Mumbai night sky on Saturday, the team’s paymasters were keeping them sweet with rewards of $225,000 per player for capturing the trophy. Indian newspapers revelled Sunday in victory, hailing Dhoni’s men as heroes for a new generation. “The World At Our Feet” crowed the front page headline in the Times of India. “The wait has ended and a new legend has been born,” the Times said, putting Dhoni’s squad on the same pedestal as the 1983 side. “Windia!” was the banner headline in the Indian Express. Not surprisingly, the mood was not so optimistic in Sri Lanka after their team lost a second successive World Cup final.“Who picked the final XI of the Sri Lanka team?” the Sunday Observer asked. It questioned the dropping of spinner Ajantha Mendis in favour of Suraj Randiv who only joined the squad as an injury replacement on Friday. – Dailytimes