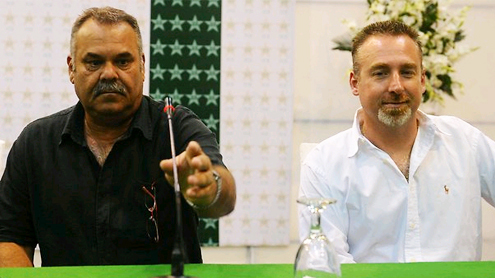 The two men will take immediate charge of the team and prepare them for the Asia Cup later this month. “We have reached an agreement with Whatmore who will be the new coach of the Pakistan team for the next two years,” PCB chief Zaka Ashraf told reporters here at Gaddafi Stadium. “We feel that a foreign coach can best exploit the talent available in Pakistan cricket,” Ashraf added. He said he wanted the best coaches in the world for his team and he gave the task of finding them to a committee appointed. “They analysed all the candidates and they have found the best people for our team. I am happy to have Whatmore and Fountain as a part of our setup and hope they can ensure Pakistan always puts up fighting performances, whether we lose or win,” he said. Whatmore and Fountain had arrived in Lahore on March 2 but there had not been an official announcement regarding their appointment. Whatmore met with the PCB in January and has now been officially given the role of head coach. Fountain, who has been fielding coach of Bangladesh and worked with the PCB before, also met the PCB in January.

57-year-old Whatmore, who played seven Tests for Australia, has the experience of coaching two subcontinent teams – Sri Lanka and Bangladesh. He was the coach when Sri Lanka won the World Cup in 1996 in Lahore. He led Bangladesh to their first Test match and subsequent series win in 2005. The highlight of his coaching tenure with Bangladesh came at the 2007 World Cup in the West Indies when Bangladesh pipped India out of a place in the Super Eight by beating them. Pakistan have had three foreign coaches in the past – Englishmen Richard Pybus and Bob Woolmer and Australian Geoff Lawson. Chief selector Mohsin Hasan Khan had been in place as interim Pakistan coach after Waqar Younis resigned in September for personal and health reasons. Whatmore’s first test will be the four-nation Asia Cup, starting March 11 in Bangladesh that also includes defending champions India and Sri Lanka. Whatmore said he was looking forward to his new challenge. “We will do our best to produce the best results with our available talent and I am confident of good results,” he maintained. To a question, he said in the Asia Cup there are top teams, they are very tough to beat. But Pakistan’s pretty good too and everyone starts the game on a level playing field, so it’s important that we are able to focus on what we are capable of doing. Forget the opposition, respect them but we are focussing on what we can do, we can’t make the opposition do anything different,” he said.

Pakistan has been looking for a new full time coach since Waqar quit in October. Under interim coach Mohsin, Pakistan won Test series against Sri Lanka and Bangladesh before whitewashing top-ranked England in the three-Test series in the United Arab Emirates. Fountain has taken place of Ijaz Ahmed. However, Pakistan will be going to Bangladesh without a bowling coach after Aqib Javed resigned last week and joined the UAE national team.Despite winning the Test series convincingly against top-ranked England, Pakistan were blanked 4-0 in the ODI series and lost the Twenty20 series 2-1 against the same opponent last month. Pakistan batsmen struggled to chase runs in most of the shorter-format games but Whatmore hoped that the team had learned their lesson. “Batting in the recent series could have been better, no question, the team understands that and the team knows that,” he said. “I don’t want to look back, I am looking forward to ensure that they are in the best frame of mind to be able to show you and everyone else that the team can bat properly and we can defend a total or we can chase a total.”

The new coach hinted that Pakistan could pick up specialists for all the three formats of the game — Tests, ODIs and Twenty20s. “There are certain players who are more happier and more in tune to different types of the game,” he said.”It’s like we try to fit a square peg in a square hole, so there will be a necessity to modify the team, given the different forms of the game that you are playing”, he concluded. – Dailytimes