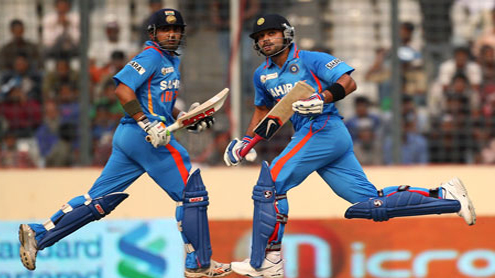 DHAKA: India’s Virat Kohli and Gautam Gambhir both cracked their 10th one-day centuries to set up a comfortable 50-run victory over Sri Lanka in the Asia Cup in Dhaka on Tuesday.

Man-of-the-match Kohli (108) and left-handed opener Gambhir (100) added 205 runs for the second wicket as India posted a challenging 304-3 before bowling Sri Lanka out for 254 in the day-night match. Seamer Irfan Pathan was the pick of India’s bowlers with four wickets, while off-spinner Ravichandran Ashwin and paceman Vinay Kumar took three apiece. Sri Lanka raced to 122 in the opening 18 overs, thanks to skipper Mahela Jayawardene, who kept alive his team’s hopes of hunting down a stiff target with a brisk 59-ball 78. But they suffered a setback when Jayawardene was caught behind off Irfan in the 19th over after smashing two sixes and 10 fours. He added 93 for the second wicket with Kumar Sangakkara (65).

Sri Lanka’s chances receded sharply after the dismissal of Sangakkara, caught at deep mid-wicket off Ashwin, who also trapped Lahiru Thirimanne (29) in the same over. Vinay removed Nuwan Kulasekara and Chamara Kapugedera off successive deliveries as Sri Lanka were reduced to 216-7, losing four wickets for 20 runs. Kohli earlier top-scored for India with his second successive hundred against Sri Lanka, having made an unbeaten 133 at Hobart in the recent triangular one-day series in Australia. India plundered 78 runs off the last 7.1 overs, with skipper Mahendra Singh Dhoni smashing a 26-ball 46 not out and Suresh Raina an unbeaten 30 off just 17 balls. India lost Sachin Tendulkar early in the innings before Gambhir and Kohli bolstered their team with their impressive knocks. Tendulkar, chasing an elusive 100th international century, could make only six runs before pushing a Suranga Lakmal full-toss straight to Jayawardene in the covers. Sri Lanka then had to wait for 37 overs to get their next wicket as Gambhir and Kohli continued to gather runs comfortably against both pace and spin. The pair reached their centuries in the 42nd over before both falling in the next over off seamer Farveez Maharoof as they attempted to step up the run-rate. Gambhir, dropped on 36, made the most of the chance and hit seven fours in his 118-ball knock, while Kohli also struck the same number of boundaries in his 120-ball innings. – Dailytimes