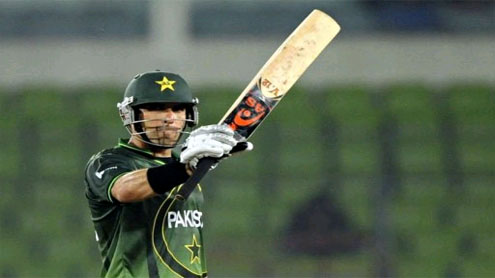 Skipper Misbah-ul-Haq and Umar Akmal cracked half-centuries under pressure as Pakistan virtually booked a place in the Asia Cup final with an emphatic six-wicket victory over Sri Lanka on Thursday.

Pakistan were struggling at 33-3 before Misbah (72 not out) and Akmal (77) added 152 for the fourth wicket to help their team achieve the modest 189-target set by Sri Lanka with more than 10 overs to spare in the day-night match in Dhaka.Fast bowler Aizaz Cheema (4-43) and off-spinner Saeed Ajmal (3-27) also played important roles in Pakistan’s second successive victory by restricting Sri Lanka to a small total.

Sri Lanka, who lost to India in their opening match, needed a win to keep their hopes of reaching the final alive but were let down by their batsmen as only Kumar Sangakkara (71) and Upul Tharanga (57) could defy the Pakistani attack.Pakistan lost three wickets had fallen in the opening 13 overs, with paceman Suranga Lakmal taking two and leg-spinner Seekkuge Prasanna, before Misbah and Akmal took charge.

The Pakistani captain hit one six and nine fours in his 93-ball knock while Akmal, who was dropped on 46, struck two sixes and seven boundaries from 72 balls.Sri Lanka, electing to bat, were earlier well-placed at 161-4 following a 96-run fifth-wicket stand between former skipper Sangakkara and Tharanga but they lost their last six wickets for just 27 runs.

Ajmal started the slide when he bowled Tharanga. He then removed Farveez Maharoof and last-man Lakmal. Cheema came back strongly to dismiss openers Mahela Jayawardene and Tillakaratne Dilshan. – Khaleejnews