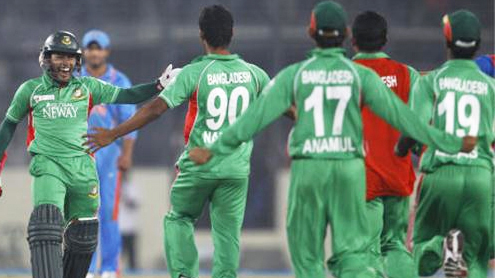 MIRPUR: Amidst all the euphoria of Sachin Tendulkar’s 100th hundred, India completely forgot that they had a match to win. And they paid a big price by losing to Bangladesh and making their road to the Asia Cup final extremely tricky. Now, they have to win againstPakistan on Sunday to stay in contention.

289 was a big enough total to defend with Tendulkar, Virat Kohli (66) and Suresh Raina(51) playing their parts. But on a slow wicket, the weakness of the Indian bowling attack was exposed as Bangladesh notched up the required runs with four balls to spare.

After Tamim Iqbal (70 off 99 balls) and Shakib Al Hasan (49 off 31 balls) had set the ball rolling with some excellent hitting, Nasir Hossain and Mushfiqur Rahim took charge as the Indian pace attack completely lost its screws. With 34 to get off 18 balls, Irfan Pathan bowled an atrocious over as Rahim and Hossain took 19 runs off it. Rahim, a good player on the on-side, walked towards off and hit deliveries outside off over square leg and mid-wicket. Irfan couldn’t find the yorker that is so vital in such a situation and bled runs.

All depended on Praveen but he too was taken for a couple of boundaries as Bangladesh came close. Hossain got out for 54, but Rahim and Mahmudullah took Bangladesh to a memorable victory. Even Ashok Dinda, coming back to the Indian team, failed to impress and bowled loosely when the going got tough.

Skipper MS Dhoni conceded that “Bangladesh played better cricket throughout. At the start of the Powerplay our bowlers felt the pressure, a bit more runs on the board would have been better. But the youngsters will learn more. Bangladesh can play really well on their day, they used the conditions well, their reverse swing bowling was good.”

Winning captain Mushfiqur gushed, “It’s a huge moment for us. We want to dedicate this to Manjural Islam Rana (Bangladesh player who died five years back). Today was a great day, we really appreciate our win.” – Timesofindia