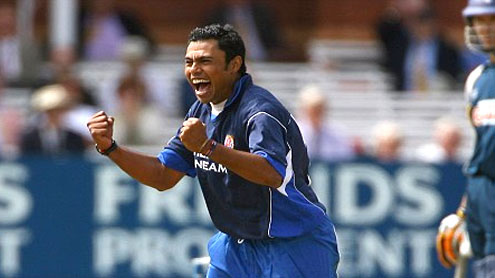 LONDON: Pakistan leg spinner Danish Kaneria has been charged with corruption by the England and Wales Cricket Board over spot fixing in county cricket.

Kaneria was accused in a British court in February of pressuring former Essex teammate Melvyn Westfield into fixing part of a match and was heavily criticized by the judge.Westfield pleaded guilty to fixing and was jailed for four months, although Kaneria had previously been cleared by police of wrongdoing after being arrested.But the ECB announced on Thursday that both Kaneria and Westfield have been charged over alleged “corrupt activities which led to Mervyn Westfield’s criminal conviction.” An ECB disciplinary panel led by barrister Gerard Elias will hear the case.

The corruption plot developed after a meeting at Kaneria’s English home in August 2009, according to information presented during Westfield’s court case.It led to Westfield accepting 6,000 pounds ($9,500) to intentionally concede runs during a 40-over English county match against Durham the following month, which was televised globally. Kaneria, who was with Essex from 2005 to 2010, was to receive 4,000 pounds ($6,300) for facilitating the fixing.

Kaneria was once an integral part of Pakistan’s test team, claiming 261 wickets in 61 tests at an average of 34.79.The Pakistan Cricket Board has overlooked Kaneria for the national team since Westfield’s case surfaced in 2010, forming an integrity committee to hear his case and which has yet to clear him.For the past two years, Kaneria had been trying to clear his name and even appealed to the Sindh High Court in Karachi to try and overturn his unofficial suspension in Pakistan. But the court dismissed his appeal last year, saying it was not within its jurisdiction.

Kaneria was warned in 2008 by the International Cricket Council over his connections with a bookmaker involved in illegal betting markets.In February, Westfield became the fourth cricketer in four months to be sent to a British jail for fixing. Pakistan cricketers Salman Butt, Mohammad Asif and Mohammad Amir were jailed in November for fixing part of a test match against England in 2010.