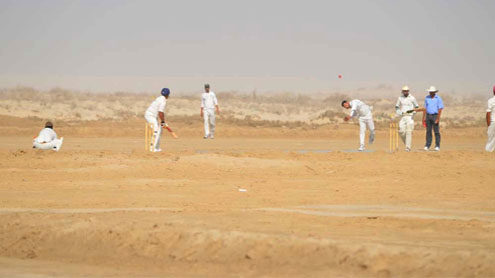 Afridi CC and Gyan Steel recorded contrasting victories to move into the final of the Sharjah Invitation Tournament, organised by the Sharjah Cricket Council, at Al Dhaid Cricket Village.

Afridi CC, aided by a blazing century from Shamsher Khan, defeated Ibsons CC by five wickets with 14 balls to spare in the first semi-final match while Gyan Steel held their nerve to beat Phoenix Medicines by one run in a thrilling last-ball finish in other penultimate clash of the tournament.Shamsher Khan hammered 102 off just 45 balls with five fours and 10 sixes as Afridi CC overhauled Ibsons’ competitive total of 179 in 17.4 overs.

Shahzad Manna (40 off 13 balls with five fours and two sixes) was the other major scorer.Earlier, Ibsons had built their innings around Fayyaz Ahmed (45), Irfan Sajid (34) and Sheheryar Khan (30). Naveed Saleem was the pick of the Afridi bowlers, taking four wickets for 17 runs.In the other semi-final match, Gyan Steel, batting first, scored 224 for five in the allotted 20 overs with Shakoor Khan (95 off 35 balls with 14 fours and five sixes) and Ahsan (62 off 39 balls with five fours and four sixes) doing bulk of the scoring.Phoenix Medicines, in reply, fell short of their intended target by just one run despite a great knock of 91 off 25 balls by Sarjeel.