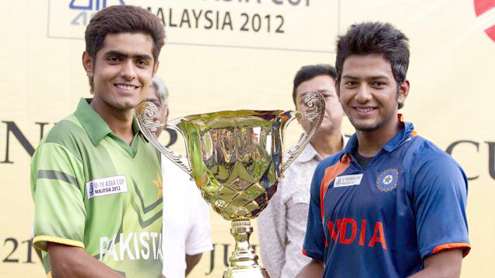 KUALA LUMPUR: For the second time in two matches, there was very little separating India and Pakistan’s Under-19 teams, as they tied the final of the Asia Cup in Kuala Lumpur in dramatic fashion. Pakistan opener Sami Aslam scored his second hundred of the series to carry his team to 282, before India captain Unmukt Chand did the same for his side.

But both centuries went in vain, with neither team claiming the trophy. Pakistan did well to achieve the tie. India were in relative control in the chase, needing 37 in the final six overs, with seven wickets in hand and Chand batting on 101. Left-arm spinner Mohammad Nawaz then produced two effective overs, claiming two wickets and conceding just five, to bring Pakistan back into the game. Chand was still around though and almost carried his bat, but his dismissal off the fourth ball of the final over – caught on the cover boundary off seamer Ehsan Adil – left India needing five off two deliveries. No. 8 Rush Kalaria pierced the off side for four, to bring the scores level. The final delivery, though, he could only chip gently to mid-off. Dot ball. Shared title.

Like in their one-run defeat to Pakistan in the group match, India chose to field. And once again, Pakistan’s innings was built around Aslam. India managed to keep the scoring in check early in the innings, but a 100-run stand at over a run a ball between Umar Waheed and Sami Aslam for the third wicket put Pakistan on course for a sizeable total. Pakistan had launched the final assault, scoring 49 from overs 41 to 45, when Kalaria removed Saad Ali and Aslam off consecutive balls. He took three more wickets, and Pakistan managed only 30 for 5 in the final five.

India’s reply revolved around a 175-run stand for the second wicket between Chand and B Aparajith. Aparajith fell 10 short of a hundred, Nawaz’s first victim of the game. Apart from these two, none of the other India batsmen managed to go past 23, as the lower-middle order let the game slip from their grasp. Aslam’s century came after scores 82 not out, 121, 47 and 77, and he, expectedly, won the Player of the Series and best batsman awards. Sri Lanka offspinner Tharindu Kaushal, who picked up 12 wickets in four games, was named the best bowler of the tournament.