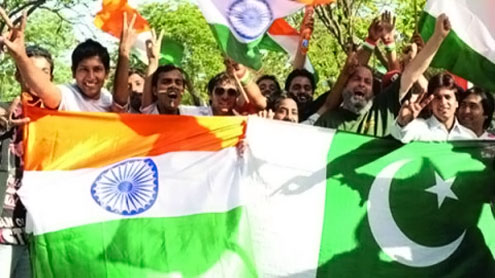 NEW DELHI: Indian cricket chiefs on Monday said they had invited Pakistan for a series later this year, their first in five years, in a further sign of improving ties between the neighbours.

If approved by the two governments, the series would comprise three one-day internationals and two Twenty20 games in December-January, the Board of Control for Cricket in India (BCCI) said.”It was decided to resume cricketing ties with Pakistan by inviting the Pakistan cricket team for a short series in December 2012-January 2013,” the BCCI said in a statement. “The modalities will be worked out shortly.”The rivals have not played a bilateral series since Pakistan’s tour of India in 2007 after cricket ties were snapped following the 2008 terror attacks on Mumbai, which were carried out by militants from Pakistan.

The ODI matches will be played in Chennai, Kolkata and New Delhi and the Twenty20 games in Bangalore and Ahmedabad, BCCI spokesman Rajiv Shukla told reporters in New Delhi.The series will be held when England, who are due to tour India later this year, return home briefly for Christmas and New Year. The Pakistan Cricket Board (PCB) swiftly welcomed the proposed series, which will now require approval from the Indian foreign affairs and home ministries.PCB chairman Zaka Ashraf told local television channels that Pakistan was still waiting for a formal invitation, but said “it seems it will surely be held later this year”.

But former India captain Sunil Gavaskar slammed the decision to play cricket against Pakistan, saying Pakistan was still not cooperating in the Mumbai attacks probe.”Being a Mumbaikar (hailing from Mumbai), I feel what is the urgency when there is no cooperation from the other side,” the Press Trust of India (PTI) news agency quoted Gavaskar as saying.However, fellow former skipper Bishan Bedi welcomed the revival. “It is a step in the right direction,” he told PTI. “The amount of interest and goodwill it will generate will be huge.”

Cricket ties have been the subject of discussions between the governments of both nuclear-armed countries, who have been holding regular meetings in a bid to improve ties and eventually thrash out a peace agreement.The countries have fought three wars since independence in 1947.The Indian and Pakistani cricket teams have only met in multi-nation tournaments since 2007.They clashed in the World Cup semi-final in the north Indian town of Mohali last year, a high-profile game that was attended by the prime ministers of the two countries.

They also played during the Asia Cup in Bangladesh in March. Both matches were won by India.
An Indian government source told AFP the decision to resume cricket ties was made by the respective boards and not the government.”The issue of resuming cricketing ties came up in recent bilateral talks and it was left for the boards to resolve it,” the source said.
“Once they have decided, then there would be the issue of internal security, which will be reviewed and decided by various agencies.”

The BCCI in May had invited a Pakistani team to take part in the inter-club Champions League Twenty20 tournament, which the Indian board owns with the boards of Australia and South Africa. Pakistan’s champion Twenty20 side, Sialkot Stallions, will participate in the tournament to be held in South Africa in October.

Test and ODI captain, Misbah-ul-Haq welcomed the resumption of cricketing ties between Pakistan and India. “The resumption of the cricket series is welcome news for people and cricketers alike,” Misbah said. Misbah added that there is always stiff competition when Pakistan and India play and the level of competition is high. Muhammad Hafeez Pakistan’s T20 captain said people have high expectations from the team when they play against India. He also hoped that the Indian team would also tour Pakistan.

The Pakistan team is expected to tour Indian in December this year for three ODI matches. Pakistan last toured India in 2007 while India participated in the Asia Cup held in Lahore and Karachi a year later, but since gunmen attacked the Sri Lankan team in March 2009, international cricket has been suspended in Pakistan. Players, officials and fans went into a frenzy over India’s invitation. Test captain Misbah-ul Haq said it was “great news” for millions of fans in South Asia. “The competition in such a series is so high that it’s important for the players. And players from both the sides miss such matches and they want to be part of it,” he told journalists in Lahore.

Former Pakistan captain Javed Miandad was similarly ecstatic. “It is definitely a great news,” Miandad said. “One must give credit to Ashraf for his whole-hearted efforts to revive Indo-Pak cricket and that paid off today.” Former leg-spinner Abdul Qadir hoped the December series would be a first step towards better relations and India one day touring Pakistan. “I think cricket will open further doors like trade and cooperation in tackling terrorism in both the countries,” said Qadir. “India should also be given the option of playing on the neutral venues like United Arab Emirates,” said Qadir.

Tags: Board of Control for Cricket in IndiaPakistan Cricket Boar
Previous Post