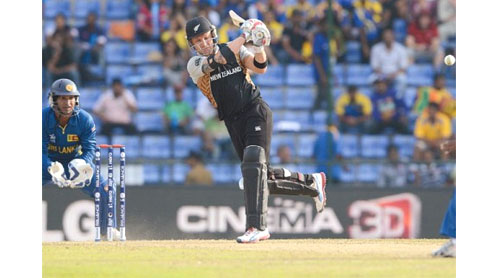 PALLEKELE: Sri Lanka beat New Zealand in a one over eliminator after the 40-over Super Eights contest was sensationally tied at Pallekele stadium on Thursday.

With both teams tied on 174 runs at the end of 40 overs in the match, a Super over round was played for the result. New Zealand paceman Tim Southee restricted Sri Lanka to 13-1 but Lasith Malinga managed better, finishing the New Zealand innings five short of his team’s total.It was the seventh tied match in all Twenty20 cricket, with New Zealand involved in four of them. Tillakaratne Dilshan (76) had put Sri Lanka on course for a successful run chase before New Zealand pulled back through some accurate bowling and fielding.Sri Lanka were in a spot of bother when they lost Kumar Sangakkara (21) and Jeevan Mendis (eight) in quick succession, needing 38 from the last four overs.

New Zealand owed their total to a career best fifty by opener Rob Nicol. Nicol hit Ajantha Mendis for three sixes in the 15th over during his 40-ball 58 after New Zealand won the toss and batted. The 29-year-old, who in all hit four sixes and three boundaries, put on a brisk 57 for the opening wicket with Martin Guptill (38) and 42 for the second with Brendon McCullum (25) before he fell in the 16th over.Nicol’s previous T20 highest was 56 against Zimbabwe at Hamilton earlier this year.