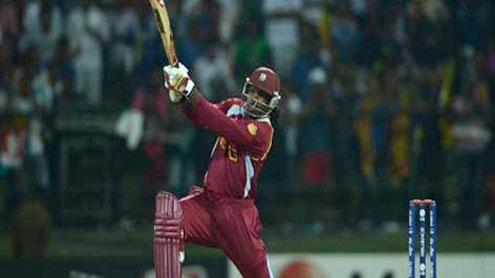 COLOMBO: Australia hope to remove big-hitter Chris Gayle early to put the West Indies under pressure during the second semi-final of the World Twenty20 in Colombo on Friday.

The belligerent left-hander holds the key to his team’s batting success and Australian captain George Bailey said it was important not to let Gayle settle down at the crease.”Their (West Indies) batting is no doubt their strength,” Bailey said after his team’s training session on Thursday. “If you can knock Gayle over early it really does put pressure on the rest of their batsmen to step up.”Gayle hit 54 to help West Indies to 191-8 against Australia in the preliminary league, before Shane Watson scored a 21-ball 41 to steer his team home via the Duckworth-Lewis method in the rain-affected match.

Gayle also smashed 58 during a 103-run opening stand with Johnson Charles to set up a 15-run win over defending champions England in the Super Eights in Pallekele. But when the opener fell for two against Sri Lanka, the West Indies crumbled for a paltry 129 to lose by nine wickets. Bailey, smarting against the unexpected 32-run defeat by Pakistan on Tuesday, wanted an aggressive attitude by his team against the West Indies bowlers — even if it costs Australia a place in the final. “I’d rather see us throw caution to the wind. If we get knocked over, we get knocked over,” Bailey said and hinted that David Hussey could be back for the semi-final in place of Glenn Maxwell.

“I saw (coach) Mickey Arthur had weighed up those two players and that’s probably the only one to be weighed up. But the structure doesn’t change in terms of a like-for-like,” the captain said. Australia’s four wins in five matches so far in the tournament have been made easier by a sensational all-round display by Shane Watson, who has scored 242 runs and taken 11 wickets. The West Indies, in contrast, have just two wins from five matches and need to lift their game if they are to stop Australia from making their second successive World Twenty20 final.

Skipper Darren Sammy insisted his team’s success did not hinge on Gayle alone. “It’s not only about Chris,” said Sammy. “Obviously he sets the momentum for us at the top of the order. But to win the game, it will need a total team effort. “In any cricket match, you get one individual doing something brilliant. But it will take a collective effort to win the semi-final.”

Sammy predicted a close game with the result depending on who wins the key moments in the game. “It could be a spectacular catch somewhere, or guys out in the middle making the right decision at a crucial time,” he said. “I think the team that wins at the end of the day is the team that will make less mistakes. “But it’s two evenly matched teams and it promises to be an exciting game.” – PT