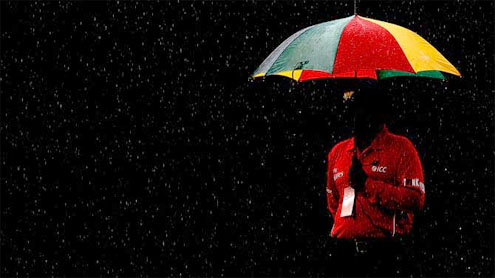 COLOMBO: Umpires at the centre of a bribery scandal denied Tuesday they were willing to fix matches for cash as cricket authorities announced an urgent probe into the allegations aired in a television sting.

An undercover investigation by the private Indian TV channel allegedly found that six umpires, including one who is a regular fixture on the international circuit, were willing to give decisions or provide inside information on the teams and playing conditions in return for illicit payments.The accusations were broadcast only a day after the West Indies’ victory over the hosts Sri Lanka in the final of the World Twenty20 tournament, quickly souring the atmosphere after one of the game’s premier events.

The International Cricket Council reacted by calling on India TV “to turn over any information which can assist the ICC’s urgent investigations into this matter.”“The ICC reiterates its zero-tolerance towards corruption whether alleged against players or officials,” the organisation said in a statement.Three of those named were from Sri Lanka, while two were from Pakistan. The sixth was the Bangladeshi umpire Nadir Shah of Bangladesh, who is a member of the ICC’s international panel which officiates in matches around the world.

Grainy footage appeared to show Shah, who has stood in 40 one-day internationals and a number of Twenty20 internationals, say he was willing to give LBW decisions on demand.The video does not show any cash being exchanged nor did the channel broadcast any proof of the umpires delivering decisions or information.In a statement, Shah said any suggestion that he was open to bribery was “absolutely rubbish”.“If I am going to fix match, I will be caught some day by the ICC… No umpire fixes matches,” he told the Press Trust of India news agency.

Pakistan umpire Nadeem Ghouri, another of those named, also denied any involvement.“I am surprised at these baseless allegations” he told AFP.Ghouri said he would “consult my lawyers to decide on my future course of action”.Ghouri has umpired in Test matches and dozens of limited over internationals, although he is no longer part of the ICC panel.Meanwhile Gamini Dissanayake, one of three Sri Lankans to be named, told the Colombo-based Daily Mirror newspaper the allegation was a “fabrication”.“It is shocking how our names have been linked to this. Obviously this is an attempt at mudslinging,” he told the daily. – Dawn

Delhi Golf Team and the Together we Golf Team

Delhi Golf Team and the Together we Golf Team