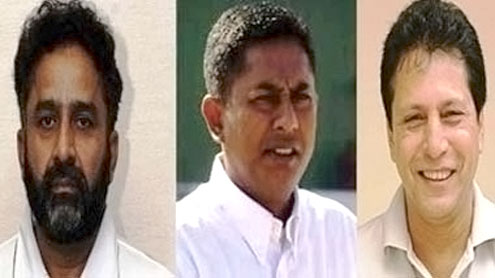 COLOMBO: Cricket authorities on Wednesday suspended six umpires at the centre of claims by an Indian television programme that they could be bribed to make favourable decisions during games.

An undercover investigation by the India TV channel allegedly found that the umpires, including one on the international circuit, were willing to give biased decisions or provide inside information in return for payment.The International Cricket Council (ICC) announced the suspensions after a meeting in Colombo, where the West Indies defeated hosts Sri Lanka in the final of the World Twenty20 tournament on Sunday.

“The ICC and its relevant Full Member Boards have agreed not to appoint any of the umpires named in a sting operation recently conducted by India TV to any domestic or international cricket matches,” it is said in a statement. “Those boards who employ and nominate the umpires directly will conduct the investigations as a matter of urgency,” it added.

Three of those named were from Sri Lanka, while two were from Pakistan. The sixth was Nadir Shah, one of two Bangladeshi members of the ICC’s international panel which officiates in matches around the world.Meanwhile, Minhaz Uddin Khan, who was media manager of Bangladesh Premier League Season-2011-12, has clarified the report broadcast on India TV alleging acts of corruption against some international umpires have caught my attention.

“Unfortunately, the report has a portion where I have been shown to make ‘objectionable’ observations and remarks naming some Pakistani cricketers. Though, I have not been implicated in any degree of corruption, the report has made every effort to string together the casual remarks and project that as proof of wrongdoings of the cricketers,” he said.

“I had visited India on invitation from the undercover reporters who had portrayed themselves as sports agents who wanted to offer endorsement, umpiring and playing opportunities for Bangladeshi players and officials in the Sri Lankan Premier League. Being a sports journalist myself and as an official of a Bangladesh Premier League team and someone with an interest in sports management, I decided to go to India after consulting some of my family members, colleagues and friends,” Minhaz added.

“I met the reporters in Delhi in August this year. In one meeting, the people who came in the guise of sports agents wanted to get information out of me which had no relevance to the purpose of my visit. I became suspicious straight away but played along and responded spontaneously to their queries as I did not know whether they were criminals or not and I feared for my safety as I was all alone there,” he asserted.

“Once the meeting was over I immediately warned fellow Bangladeshis who have received similar approaches. I told them that I thought those people had dubious intentions and that they should not speak to them. They can testify to that.”He further said: “Let me make this clear that the ‘information’ about the Pakistani cricketers that the Indian private channel is claiming that I had revealed has no relevance to reality. It was all bogus and part of an act which I considered necessary at that moment for ensuring my security.”

I can say this with all honesty to the cricketers and their families that I never meant a word I said in relation to their conduct. I know most of these cricketers personally and maintain a healthy relationship with them. There is no way that these cricketers, some of whom are the heart of Pakistan cricket, can ever do things that tarnish the image of their country and family.”

“I am suffering also. By using my name deliberately to strike made up controversy the channel has done massive damage to my image and left my family embarrassed and shocked. I do not know whether I will ever manage to overcome the sadness and shock from this episode. If the reporters had even bothered to study my background a little then I am sure they would not have found it ethically and morally right to try and trap me. I seek your understanding on this,” the BPL media manager concluded. -Natiom