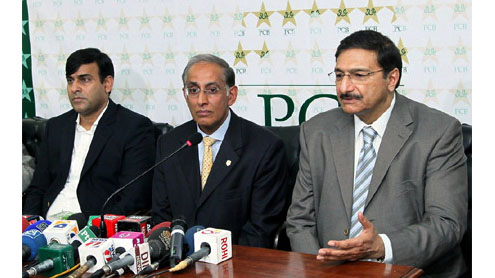 Speaking to media at the Gaddafi Stadium here on Thursday, Lorgat felt the key to making the PPL a success was the participation of international players. International sides have refused to tour Pakistan since the Sri Lankan team bus was attacked in Lahore in March 2009. Last month, a World XI side played two unofficial T20s against a combined Pakistan XI in Karachi. “I think it will be a big stepping stone if international players come to play in the PPL. That will give confidence to players that cricket is played and can be played in a secure venue, there is no reason why they can’t convince their boards to tour as national teams,” Lorgat said.

Lorgat’s appearance at the PCB headquarters came as a surprise for the media as like in the case of former England coach Peter Moores on Wednesday, the board had made no prior announcements about the former ICC official’s visit. After meeting with PCB chairman Zaka Ahsraf and other key officials to discuss the PPL, Lorgat told media that he could see that the PCB was determined to have it early next year.

“There is lot of planning and detail to be done. Lots of work to be done but I can see there is a lot of energy will and determination to get this league off the ground,” he said. Lorgat will be assisting the PCB in setting up the PPL, contributing at a strategic level to ensure the board is headed in the right direction. Lorgat, who was headed to Sri Lanka, stopped over at Lahore after PCB chairman Ashraf invited him for his expert opinions on launching the PPL in March next year.

“Cricket is a growing game and Twenty20 cricket seems to have taken roots and I am pleased to see the progress the PCB has made in that respect.” Lorgat served as the ICC chief executive for four years before stepping down at the end of June. He has been assisting Sri Lanka Cricket as a special advisor to help the board revamp its domestic cricket structure and improve the administration of cricket in the country. The PCB, however, didn’t offer him a permanent role.

Ashraf said that Lorgat had always been a great friend of Pakistan and it was a great day for Pakistan cricket that he had decided to stop in Lahore. “He has come to Pakistan on our invitation to discuss matters of significance. These days our focus is on organising the PPL in Pakistan we thought that there is no better person than Lorgat to guide us on various organisational aspects of the league. We sought his views and advice and are thankful to him for guiding us on number of matters.” – Dailytimes

NBP to open its branch in Sri Lanka