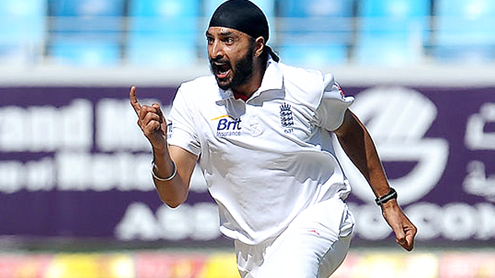 MUMBAI: England turned the tables on India to win the second Test by 10 wickets in Mumbai and level the four-match series on the final day.

India resumed their second innings on Monday, with a slender 31-run lead and with three wickets in hand, after England spinners Monty Panesar and Graeme Swann wreaked havoc on the fourth day.Opener Gautam Gambhir, who top-scored with 65, was the last man to be dismissed as India handed the visitors a 57-run target for victory. He became the last of Swann’s four victims after being given out leg-before-wicket.

The off-spinner was responsible for getting the Indian demolition underway on the fifth morning when he removed Harbhajan Singh in the 35th over (second of the day) with a catch in the slips.Panesar then turned the screws from the other end to dismiss Zaheer Khan, caught behind, three overs later. While last-man Pragyan Ojha managed to keep out 19 deliveries, it was Gambhir who fell to give England an easy target.

Captain Alastair Cook and Nick Compton eased their way to the target inside 10 overs to give England a Test win on Indian soil since 2006, which also came in Mumbai.Recently “reintegrated” batsman Kevin Pietersen was named man-of-the-match for his 186 in the first England innings, which – along with Cook’s 122 – went a long way in giving England the advantage.India won the first Test in similar fashion, with a nine-wicket win in Ahmedabad.The third Test of the series gets underway in Kolkata on December 5. – Dawn

Pakistani seller’s song a hit on the web