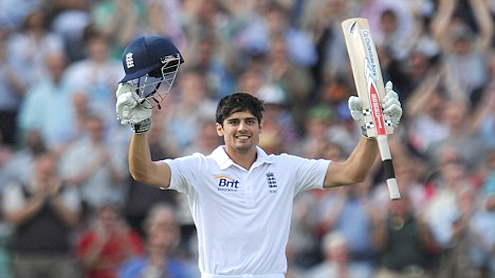 If Alastair Cook had not contrived to run himself out when just 10 runs short of the third double hundred of his Test career he would almost certainly still have been batting at the end of the day.

There just did not seem any way India could get him out.Not only would Cook have joined Mike Gatting and Graeme Fowler in becoming only the third Englishman to score a Test double hundred in India but it would have been a fair bet that he could have gone on to a triple and avenge that six-run short-fall at Edgbaston last year which revealingly nagged at him so. It really was a bizarre dismissal, Cook jumping out of the way of Virat Kohli’s direct hit after he had decided against a single rather than grounding his bat before taking evasive action, which would have saved him.

The umpires consulted and at one stage even looked like they were going to ask MS Dhoni to withdraw an appeal against England for the third time in two years but they soon realised Cook had to go. The truth was that it was his mistake and he knew it. Cook could not believe his aberration but he can hardly be condemned for it. He had started to look tired on the third morning of this third Test and, after more than a full day at the crease in this series, who could blame him.

It was not an error that he would have made at the start of an innings and nor can we expect him to do it again however long he bats. This is a man who truly learns from his rare mistakes.The good news for Cook is that it really should not stop England from winning this game and inflicting on India successive Test defeats at home for the first time in more than 12 years. And that would be quite something. Those two previous English doubles here both came the last time England won a series in India 27 years ago and there is no doubt that if this English vintage can now go on to triumph it would be an achievement as good as anything they have mustered since Andy Flower took control in 2009.

If the third day of this Test lacked the record-breaking impact of the second then it was still as satisfying for England. They lost wickets along the way but by the end of it had taken their first innings to the heights of 509 for six, a lead of 193, and their mission of batting India out of the match was almost complete.This was a totally professional, totally pragmatic display from England. Firstly they ensured they did not lose early wickets in a morning of application and then, when India had given themselves a sniff by reducing England to 420 for five, a lead of just 104, came the most positive batting of the day from Samit Patel, Matt Prior and Graeme Swann. It left India with a monumental task if they are to get out of Kolkata with the series still square.

Nothing summed up India’s plight more than the fortunes of Ishant Sharma who endured an absolute nightmare in the field which brought back memories of their hapless defence of their world No1 crown in England last year.The dropping of Cook on just 17 by Cheteshwar Pujara could be described as unfortunate but the spilling of a simple caught and bowled opportunity by Ishant when the England captain had made 156 was downright careless. Not only that but he seemed to fumble whenever the ball went near him, the epitome of all that is wrong in the field with this ageing India team.

When Cook and Jonathan Trott were together England looked as though they would score at least 600 and the captain will be delighted that Trott, who has endured a relatively lean 2012, was back to his machine-like best, only one that turned and took his edge from Pragyan Ojha denying him a century.Not so Ian Bell who, once Cook had departed in such a freak manner, wasted the chance to put his own poor year behind him on his return to the side after paternity leave with a loose drive to give Ishant a moment’s respite.

It was not necessary for Bell to play such a cavalier stroke as Kevin Pietersen was moving through the gears at the other end and, when he struck the first three balls after tea to the boundary, he looked sure to emulate Cook in scoring his 23rd Test century for England.Surprisingly Pietersen was to fall sweeping at Ravi Ashwin, a bowler who was expected to play a big part in this series but whose mystery has turned out to be as predictable as a latter-day episode of Midsomer Murders. Saeed Ajmal, or even the first Inspector Barnaby, Ashwin is not.

Patel has been promising to play a significant innings in this series and again looked the part against Indian spin before cutting another one that turned from Ojha to slip where Virender Sehwag parried and then clasped the chance. Prior then showed why England so value him at seven with one of his positive counter-attacks and, with Swann showing more responsibility at eight, England added 56 in the final 13 overs of a wearying day for India.Their spinners had improved but that was mainly because there is now signs of turn in this controversial pitch and, with the bounce becoming more uneven for the seamers, this really should be England’s game.Now they just have to make their superiority count and the transformation in this series will be complete. – Dailymail