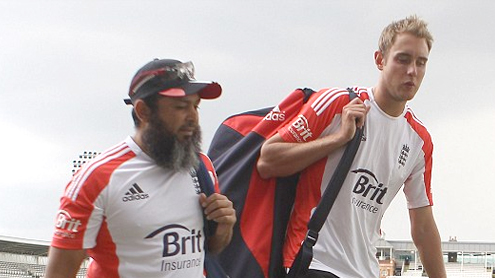 “We are very lucky that we’ve got people like Mushtaq, David Saker and Andy Flower around. We really have a great coaching staff. Mushtaq has been great in these conditions. Having played all his cricket in these conditions, he has nuggets of advice which he acquired playing here (subcontinent). He has so much to give and we have so much to learn not only from him but all the coaching staff,” Cook told mediapersons here after England won the match by seven wickets.

While the former Pakistan leggie is the spin coach, Zimbabwean great Andy Flower is the head coach. Saker is their bowling coach. He said it was due to collective team effort that his side managed to turn things around after losing the first Test and take an 2-1 lead in the four-match series.

“Lot of hard work has gone into for the results that we have. We were able to take to the middle what we have been doing at the nets,” he said. He termed his bowlers’ performances as “outstanding” and “exceptional”. “Our bowlers have been outstanding in this match, especially the first innings. Restricting (India) to 300-odd on that wicket was really really a great effort.” Praising the bowlers for their display in the Indian second innings, Cook said taking six wickets in the post-lunch session on Day four was an example of “highly skilled bowling”. “The bowlers were exceptional,” he said.

On the side’s batting performance, Cook said: “We thought of staying long on that wicket and we could do that exactly. The way we performed was satisfying. That the batsmen did well and the bowlers were superb.”  Cook said his team will go for a win in the last Test in Nagpur. “Without doubt, we will go into the last match for a win. We cannot have the mentality to go into the match hoping for a draw. “I firmly believed that we were doing the right things especially in the build to the series. And the results have proved that we are doing the right things. We got to keep doing the right things in the last match as well. It is great to be contributing like this and I hope to continue,” he said.

Cook also called his bizarre run out as an embarrassment. “I had a brain failure… I was running and the ball came like that. My immediate reaction was what I did. In realisation it is more embarrassing than anything else,” added Cook. The visiting skipper was run out on 190 in the first innings when he took evasive action letting the ball hit the stumps. – Nation