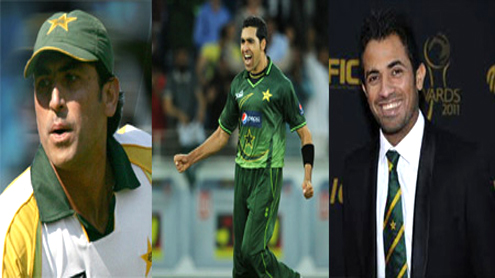 The archrivals will play three ODIs and two Twenty20 internationals in the series. But Afridi, 32, has retained his place in the Twenty20 squad. Razzaq, 33, has played 265 one-dayers and 30 Twenty20 internationals. Afridi, a veteran of 349 ODIs, played in 16 one-dayers in 2012 but scored only 182 runs with one half-century, against England in the United Arab Emirates (UAE) in February this year. Apart from Afridi, the players cut from the ODI squad that went to the UAE were: left-arm spinner Abdur Rehman, fast bowlers Aizaz Cheema and Sohail Tanvir, and all-rounder Shoaib Malik. Asad Shafiq has also been left out because of injury.

“If Afridi performs in the Twenty20s then he can make a comeback into the one-day team,” chief selector Qasim said. “It was a difficult decision to drop Afridi. He is a great player who can win matches, but in the interest of the team we have decided to left him out,” he added. The selectors have also dropped opening batsman Imran Nazir from both formats of the game after he played at the World Twenty20 earlier this year. Qasim said both players were axed because the selectors wanted to look ahead. “We have tried to infuse new blood into both teams as we feel the way forward in these formats is to try out new faces. We want to give exposure to more young players,” he added.

Former captain Younus Khan and fast bowler Umar Gul, who were rested for the ODI series against Sri Lanka, have made their way back into the one-day squad. Fast bowler Wahab Riaz is also included in the ODI squad after last playing in the Asia Cup in March. Hard-hitting opening batsman Ahmad Shahzad is back into the Twenty20 squad after impressing selectors in the National T20 Championship, which concluded on Sunday.

Shahzad represented winners Lahore Lions and scored 391 runs in eight matches, including 107 against Bahawalpur Stags in the semifinals. Left-arm spinner Zulfiqar Babar has been picked for ODIs and T20 internationals while fellow rookie paceman Asad Ali is selected for the shorter format only. The selectors have also rewarded fast bowler Mohammad Irfan for his prolific performance in the National Twenty20 Championship.

Irfan was selected in 2010 for an ODI series against England, but conceded 37 and 40 in first two matches and was dropped for the rest of the series. He has been on the domestic circuit since then and in this season’s President’s Trophy, he took 27 wickets in eight matches. He also took 11 wickets in the National Twenty20 Championship.He has been preferred ahead of Under-19 fast bowler Ehsan Adil, who was the second highest wicket-taker in the President’s Trophy after Babar, with 53 wickets. Adil also took 10 wickets in four National Twenty20 Championship matches.

“Irfan is a surprise package,” Qasim said, while explaining why Irfan was preferred over other notable performers. “Nobody is discouraged, I know we have Adil and Imran Khan on the bench waiting for the call but they will be considered soon. They are our future prospects. Irfan currently is in good form and he has the height advantage and could be our surprise package. I am sure he will live up to our expectations and will perform very well.”

A training camp will be held here from December 13 before the team leaves for India on December 22. The series begins with Twenty20 games at Bangalore on December 25 and Ahmedabad on December 27. The one-day games are in Chennai on December 30, Kolkata on January 3 and New Delhi on January 6. Bilateral cricket between the nuclear-armed neighbours was suspended after the 2008 Mumbai attacks in which 166 people were killed. India blamed Pakistan-based militants for the incident.

28 held in Spain on child pornography

28 held in Spain on child pornography