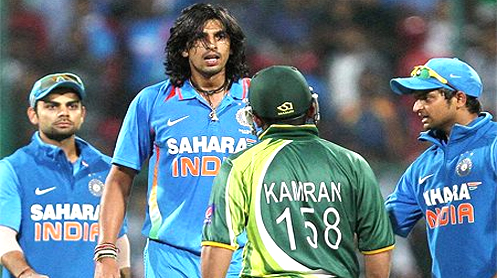 Bangalore: Playing down the face-off between Indian pacer Ishant Sharma and Pakistan batsman Kamran Akmal in the first Twenty20 International here, captains of both the sides said it was a minor argument which ended with an exchange of smiles between the two.

A heated argument erupted between the two and umpires had to step in to separate them and continue with the thrilling game which Pakistan won by five wickets.The two got into an argument when Akmal was declared not out after he was caught off a no ball by Ishant, and was beaten on the next ball.Soon both angry players exchanged a few angry words and wagged fingers at each other. Finally, the ground umpires and Indian players intervened and separated both of them.

“It happened because of some misunderstanding between the two. The bowler said something else and the batsman understood something else. I am pleased that Ishant had not abused him. We will try to keep this in check,” Mahendra Singh Dhoni said.His opposite number Mohammad Hafeez said the players doused the issue on the ground itself.

“We have come here to play competitive cricket and such incidents do happen. It is a part of the game. However, Ishant and Akmal ended the issue on the ground by exchanging smiles at each other,” he said.Apart from the argument between the two, Gautam Gambhir and Mohammad Irfan too glared at each other at the start of the match. – Onlinenews

The Extravagant Melodrama of ‘Les Miserables’

The Extravagant Melodrama of 'Les Miserables'