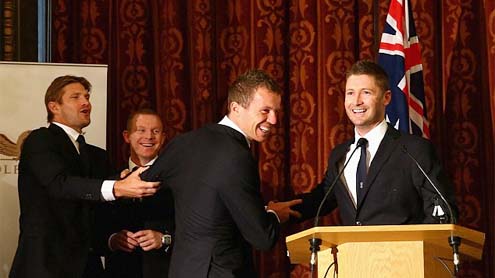 Mickey Arthur demonstrated a reluctance to walk beyond even Stuart Broad at the worst possible time for Australia. The umpire’s finger has gone up and there are no reviews left but the South African is refusing to go quietly.

Much was made of Arthur’s dignity when he was abruptly sacked at an early stage of this shambolic tour, but there was clearly a sting behind the ever-present smile of a seemingly amiable coach who feels wronged by his adopted nation.Explosive legal documents — that one could now refer to as ‘Mickeyleaks’ —  have lifted the lid off the acrimonious relationship between Michael Clarke and Shane Watson and described Arthur as ‘the meat in the sandwich’.They are the last thing Australia needed as they headed for Lord’s second test.

Just as they had shown defiance at Trent Bridge, just when it really did seem  Darren Lehmann had galvanised them, old wounds were re-opened that leave Australia having to fight yet another fire that is in danger of engulfing them.There is no doubt about the accuracy of the leak that emerged overnight either, as a statement from Arthur’s legal advisors offered nothing by way of a denial of any of the extraordinary details.It simply expressed Arthur’s regret that his claim for £2.5million compensation should be made public now.

And what a time for the full details behind that seismic split in the ranks to emerge. Australia will be going into a must-win Test at Lord’s tomorrow with fresh scrutiny on their every move and speculation over who really likes who.It is an open secret that Clarke and Watson do not get on, however often it is denied, but for Arthur to use an emotive word like ‘cancerous’, as the Seven  Network report reveals, demonstrates the full extent of the divisions in the camp.Watson stood smiling in the back row when Australia had a team picture taken at Lord’s yesterday, apparently with no dagger in his hand to plunge into his  captain’s back, but very much a man apart in this whole sorry saga.

He exchanged the odd word or two with Clarke while Australia practised, but there was no overt show of unity, no  pretending all was well between important figures who remain poles apart.Watson is old school, closer in personality to some of the great figures of Australia’s past than Clarke, the tattooed metrosexual who has had to work hard to earn the affection of a public who prefer the all-Aussie style of Ricky Ponting.Yet it seems that the modern Australia are very much Clarke’s team, particularly now that a known dissenter of his methods in Mike Hussey has walked away when his  country could have badly done with him on this tour.

It is Watson who is the outsider now, with his ‘faction’ talked of in the documents probably consisting only of his fellow victims of Arthur’s ‘Homeworkgate’, James Pattinson and Usman Khawaja.There is nothing in sport that demands team-mates must get on — as England know after last year’s Kevin Pietersen saga — but any divisions become exaggerated when the winning stops.Shane Warne and Adam Gilchrist were hardly bosom buddies during the golden years, but nothing was made of that when the Baggy Green was king.Now things are different. ‘I’m only answering questions on Test cricket,’ growled the combative Brad Haddin as he walked into a press conference yesterday.

Australia’s harassed media manager was then forced to ask ‘if anyone has any  questions on Australia’s attempt to come back in the Ashes’ when Haddin’s demand had inevitably fallen on deaf ears.It is hard to take Haddin’s assertion that all is well in the Australian dressing room seriously. Watson, after all, had insisted that he was not the man who had ‘dobbed’ David Warner in it, as the Aussies say, when he had punched Joe Root. But he was, according to ‘Mickeyleaks’.Arthur’s initial attempt to keep Warner’s scrap private, as opposed to the public shaming of Watson and Co in India, was the catalyst for his demise as coach as it showed up glaring  inconsistencies in his methods.

Once Watson had ensured Warner’s punch would have to be made public, the writing was on the wall for the former South Africa coach who  had been, in cricketing terms, a ‘dead man walking’ ever since his  misjudged Indian stance.Watson may have thought he had won his battle against Arthur, who was supported by Clarke when the South African was sacked, but it is Arthur himself who may well have the last laugh.And if that is at the expense of any remaining hopes Australia have of winning the Ashes then the joke will be not only on Clarke and Watson but Australian cricket itself. England will barely believe their luck that the old enemy should show signs of imploding again at such a sensitive time.

The only thing they have to worry about is whether  Steven Finn should play on his home ground, or be replaced by Tim Bresnan or Graham Onions, and Ian Bell managed to keep a straight face yesterday as he trotted out the party line that England ‘are not thinking about what Australia are doing’.Surely they are. And surely they know they will never have a better chance to kick Australia when they are again down at Lord’s. That is if Arthur doesn’t put the boot in again for them.