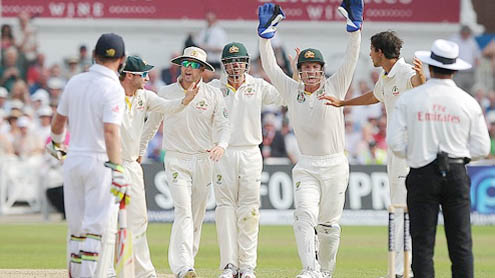 England and Australia will be handed extra reviews under the controversial Decision Review System (DRS) during this winter’s Ashes series.

Following a meeting of the ICC’s chief executives committee in Dubai it was agreed that the number of reviews will be topped-up to two after after 80 overs of a Test innings.At present teams are only permitted a maximum of two reviews per innings.The new playing condition will be put on trial from October 1, meaning they will be in place for the start of the Ashes, which begin in Brisbane on November 21.The change comes following an Ashes series in which the DRS came under criticism from both England and Australia.

The ICC were forced to fly out their general manager cricket Geoff Allardice midway through the series to meet both sides after they lodged official complinats about the DRS.The third umpires’ use of the system, as well as percieved anolmolies in some of the technology including Hot Spot, were highlighted as problem areas.The CEC on Wednesday acted on those concerns – and an update on a technology trial conducted during the third Test at Emirates Old Trafford – by agreeing to set up a ‘Working Group’ to look at ways to better use the system and train umpires.

It also suggested that Real-Time Snickometer – which is currently only used by TV networks covering matches – could be included in the list of DRS technology available to third umpires.The CEC reviewed the performance of the Decision Review System (DRS) during the Ashes series and received an update on a technology trial that was conducted during the Old Trafford Test,’ an ICC statement read.’The CEC agreed that a Working Group be constituted to consider how the ICC should best use technology in umpire decision-making in the future.

‘The considerations of the group will be wide ranging and include a review of the objectives and philosophies of using technology, the technologies, protocols and procedures as well as the role and training of television umpires.’It was also agreed that a trial will be conducted whereby a team’s referrals will be topped-up to two reviews after 80 overs of an innings. This trial will start from 1 October 2013 in all Test matches in which the DRS is used, with the results being monitored and considered by the Working Group.On the issue of including Snicko, the statement continued: ‘Noting that most of the contentious decisions relate to faint edges, the performance of the Real-Time Snickometer during the ICC Champions Trophy 2013 and the Ashes, and the potential to use this technology to assist the umpires in making these decisions was discussed.

‘An independent assessment of this technology will be conducted before a decision is made on its inclusion in the list of approved DRS technologies.’Another major talking point during the Ashes was the umpires’ decision to call the players off for bad light at the end of the fifth Test at the Kia Oval – with England 21 runs short of victory.A three-day workshop of international umpires and referees subsequently promised to try and maximise playing time and clamp down on slow overs rates, a stance welcomed by the ICC.The CEC also endorsed the umpires’ intention to become far stricter on poor over-rates and time wasting and to maximise playing time in conditions where it is safe to do so.’

In terms of one-day cricket it was agreed to retain use of two balls during one-day internationals, after the CEC ‘discussed the matter in detail’.One ball will, however, be used per innings when ODIs are reduced to less than 25 overs in the first innings.’Following due consideration of the cricket committee’s views and the arguments for and against retaining the two new balls provision, opinions of the CEC members remained divided and, as such, the current playing condition remains as is,’ the statement read.’The CEC asked the ICC Cricket Committee to prioritise investigations into the development of a ball that can last the full 50 overs of an innings whilst still providing a fair balance between bat and ball.’