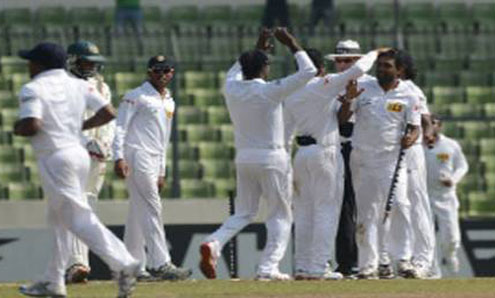 DHAKA: Off-spinner Dilruwan Perera picked up five wickets as Sri Lanka thumped fragile Bangladesh by an innings and 248 runs in the first Test in Dhaka on Thursday.

Bangladesh, trailing by a huge 498-run margin on first innings, were bowled out for 250 in their second knock after lunch on the fourth day at the Sher-e-Bangla Stadium. Perera, a 31-year-old playing in his second Test, finished with five for 109 while seamer Suranga Lakmal took three as the hosts were dismissed in 51.5 overs with a day to spare.

Bangladesh, who resumed the day at 35-1, failed to cope with Sri Lanka’s pace and spin assault and lost their last nine wickets for 215 runs despite the even-paced pitch. The hosts were reduced to 197-9 before the last-wicket pair of Rubel Hossain and Al-Amin Hossain boosted the total with lusty hitting during an entertaining partnership of 53 runs off 38 balls. Rubel made 17, while Al Amin returned unbeaten on a quickfire 32 off 18 balls that contained four sixes and one boundary.

Bangladesh, who made 232 in their first innings, conceded their highest Test total of 730-6 declared. Three Sri Lankans hit centuries including Mahela Jayawardene, who scored an unbeaten double-ton. Sri Lanka have now won 14 of their 15 Tests against Bangladesh, eight of them by an innings margin, and drawn the other. On their previous tour in 2008-09, Sri Lanka had won the first Test by 107 runs and the second by 465 runs.

Bangladesh, who languish at the bottom of the Test rankings at number 10 – lower than unfancied Zimbabwe – have lost 68 of their 82 Tests since gaining full status in 2000. They have won four Tests, two each against Zimbabwe and the West Indies. Opener Shamsur Rahim was dismissed off the second ball of the day, fending at a vicious short ball from Shaminda Eranga and edging a catch to wicket-keeper Dinesh Chandimal.

Number three Marshall Ayub had scored 18 when he gloved a bouncer from to Kaushal Silva at short-leg as Bangladesh slipped to 50-3.

The hosts reached 102 before Perera broke through by trapping Shakib Al Hasan leg-before for 25. Mominul Haque smashed eight boundaries in a fluent 50 off 57 balls, but the assault did not last long as he became Perera’s second leg-before victim.

Perera bowled skipper Mushfiqur Rahim for 14 off what became the last ball of the session, but Nasir Hossain (29) and Sohag Gazi put on 33 for the seventh wicket after the break. Gazi hit a 19-ball 23 with two fours and as many sixes before being leg-before to Lakmal. The second Test starts in the port city of Chittagong on February 4. Two Twenty20 matches and three one-day internationals will follow it.