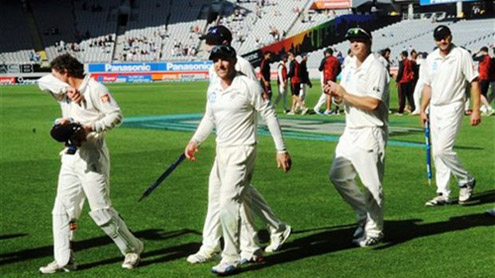 Neil Wagner was the toast of New Zealand Sunday as they pulled off a dramatic 40-run win in the first Test against India at Eden Park. Wagner, New Zealand’s go-to man, twice turned the game with quick wickets to wrest control away from India in a match that see-sawed throughout. New Zealand, with innings of 503 and 105, had set India (first innings 202) a winning target of 407 and had them all out for 366. On a riveting fourth day of the David and Goliath clash between the eighth-ranked New Zealand and second-ranked India, the outcome was settled in the final session when India lost their last five wickets for 98 runs.

Wagner made the crucial breakthroughs, earning high praise from captain Brendon McCullum whose own double-century provided the backbone of New Zealand’s huge first innings. “Neil Wagner, in particular, was the standout for me today. He epitomised everything we want to be known for as a team and he did it in a clutch moment as well,” McCullum said. “I can’t talk highly enough of him. Obviously Trent (Boult) and Tim (Southee) are our spearheads but Neil Wagner is such an important piece of the puzzle for us.” At tea on Sunday, with four sessions remaining, India needed 137 to win while New Zealand needed five wickets.  As the target narrowed and wickets fell, rival skippers McCullum and Mahendra Singh Dhoni were forced to rethink their strategies. When the first over after tea saw the removal of Rohit Sharma for 19, India opted to go on all-out attack. Dhoni and Ravindra Jadeja belted 54 in under seven overs in what Dhoni described as deliberate “risky cricket” to put pressure on New Zealand. But the gamble did not pay off. Boult ended their slogfest by sending Jadeja packing for a rapid 26 off 21 deliveries. “We got quite a few runs but we needed maybe 20 runs more and then we could have changed gears,” Dhoni said. “Maybe that was one shot too many but we got close to the target because of that period.” Zaheer Khan joined Dhoni in a 25-run stand, forcing McCullum to spell his senior bowler Southee and go back to Wagner. He instantly broke the partnership to reduce India to 349-8. With Dhoni left to try to get his side home Wagner struck again, bowling the Indian captain for 39. Boult ended the innings when Ishant Sharma was caught behind for four.

The dismissal gave B.J. Watling his sixth catch of the innings, a world record fourth innings performance by a wicketkeeper. He equalled McCullum’s New Zealand record of nine for the match. Wagner ended the innings with four for 62 while Southee and Boult took three apiece. Earlier, India were cruising at lunch after resuming on 87-1 and getting through the morning session for the loss of only Cheteshwar Pujara (23) to be 180-2. New Zealand regained control after lunch when Wagner produced his first magic spell, toiling with the old ball to remove Shikhar Dhawan and Virat Kohli who had eased their way to 222-2. He had Kohli caught low down by wicketkeeper Watling for 67 before nicking Dhawan’s glove to remove the opener for 115. New Zealand were fortunate to claim their third wicket of the session when Boult rapped Ajinkya Rahane (18) on the pads with the first delivery of the new ball in the last over before tea. Replays showed the in-swinger hit the bat first.