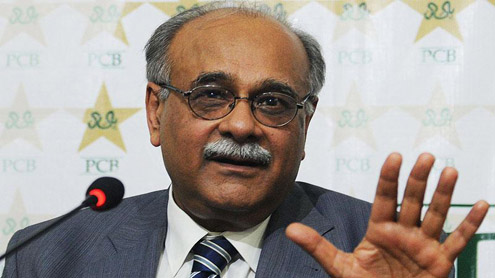 The Pakistan Cricket Board (PCB), headed by its new chief Najam Aziz Sethi, on Tuesday appointed former captain Moin Khan as the head coach of the national team in place Australian Dav Whatmore whose two-year contract expired last month. Moin will take charge of the team for the upcoming Asia Cup and Twenty20 World Cup in Bangladesh. Moin had served as manager of the national team since last October but was sacked when the Islamabad High Court reinstated Zaka Ashraf as PCB chief last month. The Asia Cup will be played from February 25 to March 8 and the Twenty20 World Cup between March 16 and April 6.

The decision of Moin along with other appointments came in the backdrop of the changes that took place on Monday when Prime Minister Nawaz Sharif, who is also patron of the board, dissolved the PCB governing council and sacked Ashraf on charges of mismanagement and misuse of powers. The Prime Minister also constituted an eight-member management committee to run the sport. Headed by new chairman Sethi, the management committee reversed all decisions taken by Ashraf declaring null and void the appointment of former Test captain Aamir Sohail last week as chief selector and director of game development. “The management committee decided in principle that any decision which lacks transparency or due process shall not be ratified,” said a PCB spokesman while briefing the press after a five-hour meeting. “There is no record of any appointment letter being issued to Sohail so he holds no post on the board,” the spokesman for the PCB added. The management committee appointed former Test captain Zaheer Abbas as the Pakistan team’s chief cricket consultant who will accompany them on all tours. Abbas was also named on the management committee by the federal government.

Former Test opener Shoaib Mohammad has been given the assignment of new fielding coach to replace Englishman Julian Fountain whose contract also expired last month. Former Test batsman Azhar Khan has taken place of Sohail. Bowling coach Mohammad Akram’s contract is also renewed for another two years. Moin, 42, was shortlisted along with another former captain and ex-coach Waqar Younis by a four-man committee, which included former captain Javed Miandad, Intikhab Alam and Wasim Akram earlier this week. The decision of Moin’s appointment came after a lengthy management committee meeting under the chairmanship of Sethi. The decision came as a blow to Waqar who was regarded as a favourite to regain the post he left in 2011 but Ashraf’s sacking led to him not being selected.

“Moin has been appointed head coach on the recommendations of the coach committee and since we have no cricket until October this year we will review his contract after the two tours,” said the PCB spokesman. Moin played 69 Tests and 219 one-day internationals for Pakistan in the 1990s and 2000s. He has also coached the Pakistan and Indian domestic teams but never an international team. Moin has been team manager since July this year. Former paceman Zakir Khan, a director in the PCB, takes over as manager for the two tours.