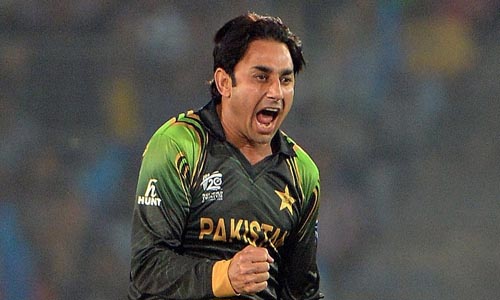 Pakistan’s spin wizard Saeed Ajmal will join several leading international players for the Lord’s bicentenary match between Marylebone Cricket Club (MCC) and a Rest of the World XI scheduled to be staged on July 5. The MCC XI will be captained by India hero Sachin Tendulkar while the Rest of the World side will be led by Australia great Shane Warne.

Ajmal told Pak passion.net. “It should be a fantastic occasion featuring some of the greatest players in the history of the game.” “There are many superstars in both teams and it will be brilliant to play alongside and against some of cricket’s legends and biggest names,” Saeed Ajmal said while adding that he along with his two teammates would also be serving as ambassadors for Pakistan come July 5. “We’ll be there to not only do our best on the field for our respective teams, but we are also at Lord’s as ambassadors for Pakistan cricket.”

The dashing Shahid Afridi echoed Ajmal’s words in an earlier statement. “Lord’s is always a wonderful place to play cricket and I’m really looking forward to going back there,” said Afridi in a MCC statement. “It’s going to be great to be involved in the Lord’s Bicentenary celebrations and I’d like to thank MCC for inviting me to take part in the game. “There are plenty of great players on the team sheet for this match and I can’t wait to share a pitch with them again — especially in such an amazing setting.”