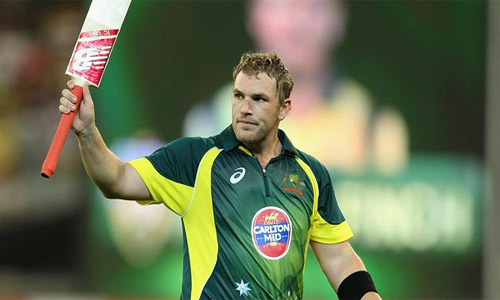 Top-ranked batsman Aaron Finch was named as Australia’s new Twenty20 captain on Monday after George Bailey stood down to focus on next year’s World Cup. The explosive opener, number one on the Twenty20 international batting rankings, will first take charge of the side during the upcoming the series against Pakistan in UAE.

The 27-year-old has racked up an average of 41.25 in 18 Twenty20 internationals, including a stunning 156 off 63 balls against England last year. Finch has captained Twenty20 sides the Melbourne Renegades and Pune Warriors but he said it was a “big surprise” to receive the phone call from national selector Rod Marsh. “Having the honour to captain your country in any form of the game is something that all young cricketers dream about,” he said. “It came as a big surprise but it was a very nice phone call to receive from Rod Marsh.

“It goes without saying that I will do my utmost in this role as we lead into the ICC World T20 in about 18 months’ time. It’s going to be very exciting.” Young fast bowler Pat Cummins was also included in the T20 squad, having last played for Australia in October 2012 before suffering a back injury.

Bailey, 32, announced on Sunday that he wanted to prepare for the one-day World Cup in Australia and New Zealand early next year and to play more cricket for his state, Tasmania. (AFP)