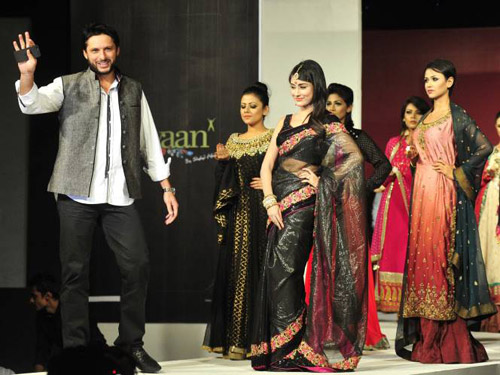 On October 4, 1996, batting for the very first time for his country, a 16-year-old Pakistani leg-spinner, gave the Sri Lankan bowlers a thrashing they would never forget and stormed his way to a hundred from just 37 deliveries.

The feat still stands as the fastest hundred ever scored in a one-day international.  Seventeen years later, the man who scored that hundred still remains something of an enigma. Shahid Afridi entered the Pakistani team as a leg-spinner but the world would go on to recognize him as one of the cleanest hitters of the cricket ball. He holds the record for the maximum number of sixes in the 50-over format. He is third in the list of top wicket-takers in T20 internationals.

Over 7000 runs and more than 350 wickets in ODIs make his records look astonishing. He is a man who can retire from Tests, then make a comeback as a captain and then retire immediately. He can chew the cricket ball in front of 36 cameras and get away saying, ‘it just happened.’ You just never know what he’s capable of. He can pull off the best and the worst on a cricket field. One day he’d inspire his teammates with a spirited performance and the next day he would rough up a fan at an airport. And on another day you are very likely to stumble upon a movie poster that reads “Main hoon Afridi”! But that’s what’s fascinating about Shahid Afridi. He is a peculiar character. Be it on field or off the field, the only way he does things is the ‘boom boom’ way. His ‘Mad Max’ ways with the bat, his signature celebration after taking a wicket, his passion for the game makes Afridi a crowd-puller.

With ‘Boom Boom set to start a new chapter in his cricketing life as Pakistan’s T20 skipper, we bring you some rare and unseen images of this dashing all-rounder, hoping he continues to give us more moments of magic. -msn

Scotland ‘No’ Votes Have Sizable Lead