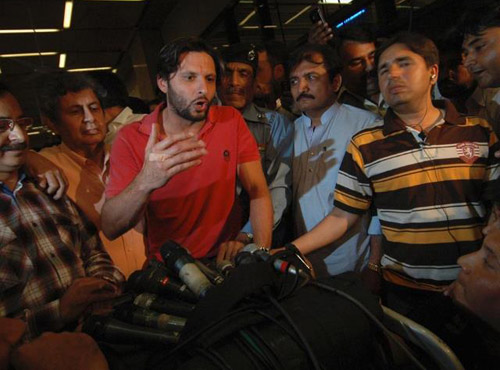 The 36-year-old off-spinner is serving suspension on illegal bowling action and will not be available to play internationally until he is cleared after remedial work and reassessment.

Ajmal has been an integral part for Pakistan in all three formats of the game, having missed only three Twenty20 matches since his debut, also against Australia at the same venue in 2009. He is the leading wicket-taker in all Twenty20 cricket with 85 in 63 matches, a record which Afridi admitted made him an important bowler. “We all know the importance of Ajmal and we will miss him,” Afridi told reporters after the team’s practice session on Thursday. Pakistan have selected 22-year-old left-arm spinner Raza Hasan to replace Ajmal, a selection Afridi hoped will come good. [contentblock id=2 img=adsense.png]

“I am very confident that Hasan has played cricket before and has done well,” said Afridi of the spinner whose all six wickets came in seven World Twenty20 matches in Sri Lanka two years ago. Afridi said other spinners will also take responsibility. “(Mohammad) Hafeez and I will be there and as captain when I look at my bowling, definitely miss Ajmal, but I am very confident that we will have no issues,” said Afridi. Pakistan have also included uncapped 24-year-old leg-spinning allrounder Saad Nasim to bolster the spin attack. Australian coach Darren Lehmann Wednesday played down Ajmal’s absence, saying Pakistan will be tough even without the spinner as they have youngsters who can surprise.

Afridi hoped it will be a keenly contested Twenty20 game. “Both teams are balanced so it will be a good game. All the players have played cricket, this type of cricket you need youngsters and I am confident as a player, they will deliver,” said Afridi, who was last month appointed Twenty20 captain for two years. Afridi said he wanted all-out effort from his team.