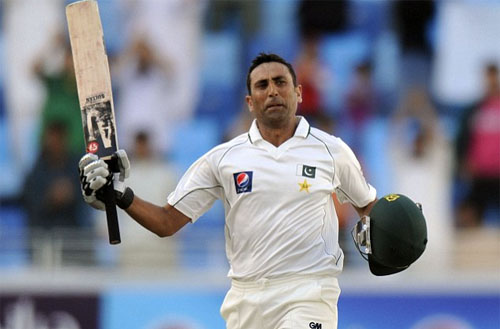 Younis became the first player after 90 years to score three consecutive tons against Australia since England’s Herbert Sutcliffe in 1924-25 as Pakistan reached a position of strength after tea on the first day of the first Test in Abu Dhabi.

Earlier, Ahmed Shehzad and Mohammad Hafeez provided Pakistan with a firm opening partnership as both of them made a 57-run stand for the first wicket before Lyon caught Shehzad’s leg before wicket. Hafeez later became victim to MG Johnson. [contentblock id=2 img=adsense.png]Pakistan was looking for a victory push as captain Misbah-ul-Haq decided to bat first after winning the toss. Pakistan retained the same 11 men who featured in their 221-run victory in the first Test, while Australia made two changes, dumping their two-pronged spin strategy that backfired in Dubai.

Paceman Mitchell Starc came in for left-arm spinner Steve O’Keefe who bled 219 runs for his four wickets in the Dubai test. Off-spinner Nathan Lyon, who conceded 220 runs in Dubai for his two wickets, was the lone specialist spinner in the Australian side.